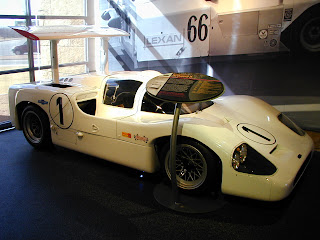 Chaparral cars built the 2F to compete in the 1967 World Manufacturer's Championship races. The 2F was extremely fast and led or ran near the front of every race in which it competed. In spite of development problems with a new aluminum big block V8 and three speed Chaparral automatic, the 2F won the last race of the season at Brands Hatch, England ( The BOAC 500 ) winning against the full might of the factory teams from Porsche, Ford, Lotus, and Ferrari.
Like the 2E, the 2F featured a high, moveable wing above the inclosed cockpit chassis. To control the wing, the driver pushed a pedal with his left foot to hold the wing in a flat low-drag position when accelerating on high-speed straight sections. When cornering, the driver released the pedal, which moved the front of the wing to a downward angle to increase downforce and aid in deceleration.
"It was terrific to not go flying off into the wild blue yonder but just make a tiny, little jump and just come down again."  -  2F driver Phil Hill describing a famous jump at the German Nurburgring that sent most cars airborne.
Posted by Steelworks at 5:00 AM