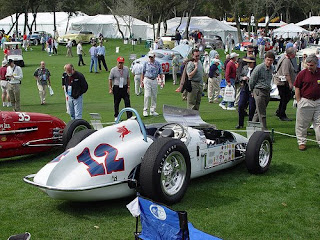 Coming up soon on the '09 car calendar is Bill Warner's wonderful Amelia Island Concourse d'Elegance. Already in its 14th year, "Amelia" is going strong and is quickly proving itself to be the Pebble Beach of the east coast. Thanks to Mr. Warner's wide range of automotive interests and love of all things "motorsport", those who attend are treated to not only the best examples of European exotics and American pre-war classics but also to some of the best restored and most historically significant race cars in existence. Also of interest to lovers of speed are the intimate panel discussions and meet-and-greets with some of racing's greatest legends that have become a staple of Amelia.
This year will honor racing legend and commentator extraordinaire David Hobbs and will feature the west coast custom creations of Bohman and Schwartz. Also in attendance will be both Indy drivers and Formula one drivers, along with a collection of cars representing both, all from the great 1950s and early '60s era. Drivers in attendance will include Johnny Rutherford, Bobby Unser, and Parnelli Jones. Friday will feature an amazing panel of legendary 1950s California customizers Dean Jeffries, George Barris, Daryl Starbird, and modern builder Chip Foose.
Bill Warner has done a tremendous job building this into a world class event in a relatively short period of time, and with his history as a successful SCCA Pro-Racing driver and lover of "all things speed", he is definitely our kind of car guy. Make your plans to be there now on the weekend of March 13-15 and enjoy the experience that is Amelia!
Posted by Steelworks at 5:00 AM

Ameila Island is a wonderful event. I've been there twice, both times in conjunction with the (sadly now gone) Forza Amelia Vintage Rally. What is so wonderful about Amelia, beyond Bill Warner's excellent and widely varied choice of vehicles, is the approachability of their display. You can spend as much time as you like, looking at a car from any angle. When I was there last time, I literally spent two hours perusing a CanAm car I had not seen since I was a boy standing trackside at Road America... since I only caught glimpses back then, I wanted to really get a good look this time!

At no other "top tier" concours would they allow an OCD car nut like me to lie on the grass and ponder suspension components from 3 inches away for any length of time without a visit from burly men with earpieces. Bill Warner gets it. Thank goodness for that!

Couldn't agree more. It is fast approaching ( and may already be ) top position among U.S. concours. Pebble will always be Pebble and will probably always be king, but isn't it nice to know that an equal quality event with a more varied lawn is on the other side of the country keeping Pebble honest?