1956 MV Augusta ( another gem from the Barber Motorsports collection ) 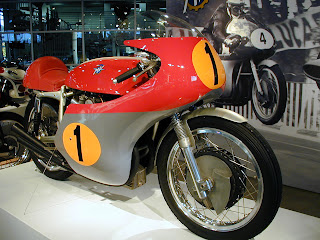 Returning our attention once more to my visit of the Barber Motorsports Museum outside of Birmingham, Alabama, and one of my favorite sightings from the day. A very tough one, picking favorites from this astonishing collection, but being a huge fan of John Surtees, it was an awesome thing for me just to be seeing this bike in person.
As most of us know, Surtees is the only person to have ever won the world championship on both two wheels and four. On motorcycles, he won the 500cc category an incredible four times and paired that with winning the 350cc championship three times. He is also credited with being the first person to win the Senior TT on the Isle of Man three years in a row. That of course would be enough for most, but John went on to try his hand at sports car and Formula One racing. He, and all who witnessed him behind the wheel, would soon recognize that his talents quickly translated to his newfound discipline. Surtees would end up taking the Formula One World title in 1964 for Scuderia Ferrari, only four years into his career in auto racing.
By the late 1960s, Surtees would conquer most of his motosports goals and turn his attention to becoming a constructor. Surtees racing cars would gain immediate respect for their beautiful construction, reliability, and competitiveness.
Today I'd like to turn the attention to one of John Surtees' early winning mounts, the 1956 MV Augusta 500cc race bike pictured above. This bike is very special, as it was hand made at the MV Augusta factory for the sole purpose of being the best racing motorcycle of its time. Ridden by a young John Surtees, the combination of rider and machine captured the 500cc World Championship crown in 1956, and three more from 1958 to 1960.
The specs on this bike would be as follows;  air-cooled, transverse four cylinder, four stroke engine producing about 55hp @ 10,500 rpm. It featured gear-driven twin overhead cams, four Dell 'Orto 28mm carburetors, and a five speed gear box. Weighing in at a touch over three hundred pounds, these factory race bikes could easily hit speeds of up to 150mph. Not bad for 1956! I can't imagine the sound this makes when ridden in anger.
Posted by Steelworks at 5:00 AM