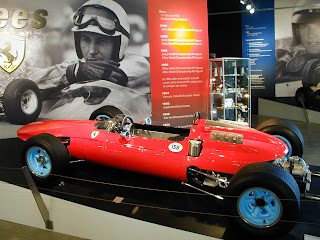 Here's yet another reason to make the trip to Birmingham, Alabama and visit the Barber Motorsports museum. I was really in awe of this car. I'm not sure that I've stood in the presence of a F1 World Championship winning car before. I suppose I must have at some museum somewhere at some point, but it didn't come to me if I had. And if I had, I can't imagine too many cars in that category that would have as much of an impact on me as this.
This is the very car that carried the great John Surtees to his 1964 Formula One World Championship. Unlike today, where race teams build and use up to 6 cars per driver throughout a season, John scored most of his top finishes and ran the majority of his races in this car. The series that year went right down to the wire with Surtees finally taking the World Championship at the last race in Mexico.
This car was basically Ferrari's answer to the Lotus 25, using a semi-monoque chassis with a 1.5 litre V8 in the rear rated at 250 hp. All previous Ferrari's used the tried and trusted tubular space frame design. The car also featured a unique for the period direct injection fuel system much like the LeMans Mercedes Benz racers.
This was an incredibly clean and simply designed Formula car. As Enzo Ferrari was famous for not following trends ( and oftentimes scoffing at them much to the detriment of his teams success ) , he was also famous for jumping out in front when he finally did join in with what others had already shown to be a way of the future. This car was a spectacular example of that. 250 hp in a car that tipped the scales at under 1,000 lbs when fully dressed with a top speed of 165 mph. It is no wonder that with a driver as talented as Surtees, this combination clinched the 1964 World title.
Posted by Steelworks at 5:00 AM