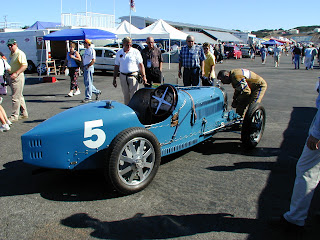 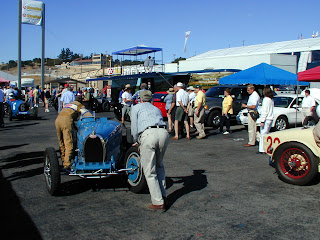 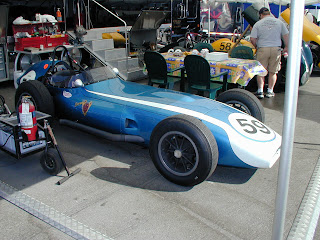 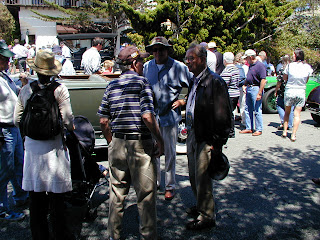 It would appear that I can't stop myself, I hope that's OK.
We've now moved onto Monterey 2003;
Remember what I was saying about the comradery and spirit of early racing still being alive and well? Well, this is what happens when your Type 35 won't start after coming in from its track time and you don't have your crew nearby; a kind civilian, namely my friend Mark Lambert, will gladly step up and help a fellow car guy.
This was a real treat to see in the paddock, and talk about rare!, the Offy powered Scarab Formula One car of Don Orasco. Nine of these cars were originally built. This is one of three in existence.
Finally,a really important moment to me, and one that I'm happy to have caught on film. Tom Sparks visiting with his old friend Phil Hill. Just happened to run into him on the street! Tom and Phil go back to when Phil had a hot rod as a teenager. They came up together in racing and even moreso in the classic car restoration business. As I said in an earlier post, this guy is one of my biggest heros from any walk of life. I had a nice visit with him that day and it became one of the great highs of my life that he would remember me ( as Tommy's friend ) the next couple of times that I saw him over the years before his passing. Again, this is the stuff that our wonderful hobby/sport can make possible. It's always about the people isn't it?
Posted by Steelworks at 5:04 AM