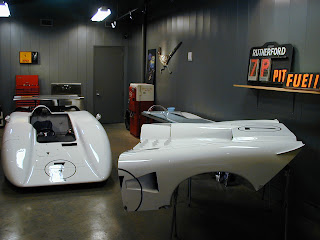 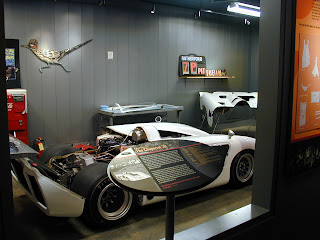 Built for the 1969 Can-Am season, the Chaparral 2H introduced a dynamic new design. Dubbed "The great white whale" by its competitors for its unusually long and narrow shape, the 2H featured a fully stressed fiberglass shell with only a small sub-frame to stabilize the load-bearing engine and transmission. The 2H's streamlined shape reduced drag and produced downforce for added tire grip. In addition, major mechanical components were placed in the rear to aid in rear weight bias. Additionally, an innovative ride-height control system automatically adjusted the suspension for changes in aerodynamic downforce at speed.
A major set-back occurred during development of the 2H when Jim Hall was severely injured in a crash in the Chaparral 2G during a race in Las Vegas. Hall's rehabilitation severely delayed development and testing of the 2H. Driver John Surtees was hired to drive the 2H but always felt uneasy with the unorthodox design of the car and its uncharacteristic driving style. Despite going through several modifications, the 2H never reached its potential. For the 1970 season the Chaparral team decided to shelve the 2H project and focus instead on the 2J.
"The 2H was a predecessor to the kind of cars people build today."-  Jim Hall
Posted by Steelworks at 5:02 AM