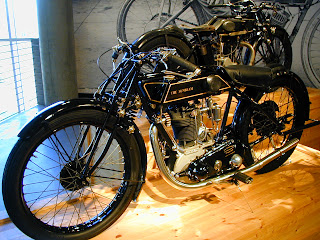 As someone who prides himself on having a decent knowledge of our pre-war racing heros, I'm certainly no Doug Nye. I do the best I can with what I have but, even with what sometimes feels like a limitless amount of enthusiasm and energy for this stuff, I can only keep up with so much. Some stuff should be a no brainer I know, and some of the historian material does enter the transom and then drift past to be forgotten in the currents, nobody's fault but mine if it doesn't stick to my mental ribs.
One of these points of motorsport's history that I was recently reminded of was the fact that a good number of pre-war racing drivers started there careers competing on two wheels. The list is long and impressive, but may I throw out two names that might just ring a bell with you???, Tazio Nuvolari and Achille Varzi. That's right, both of these great ( actually the greatest ) pre-war Italian racing champions began their careers on motorbikes. In fact, Nuvolari kick-started his career by becoming the Italian motorcycle champion in 1924.
Although Varzi didn't have the success on two wheels that Nuvolari enjoyed, he learned much from his time behind the bars and was able to make it instantly translate to his new career in sports and Grand Prix cars.
The bike that is pictured above is a rare piece of hard documentation from Achille Varzi's past.
This extremely rare 1924 Sunbeam Model 9 is not only the earliest surviving example of this model, but is the very bike raced by Achille Varzi. This bike began its life on display as a brand new machine under the Sunbeam banner at Italy's 1924 Turin show just before Varzi took ownership.
Being one of the great early examples of a high-performance 500 single, these bikes were highly sought after when new, as they were among the fastest and most competitive in their day.
Posted by Steelworks at 5:00 AM

Stumbled across this old post while researching a piece on Varzi, and it made me think of someone else to add to your list: Piero Taruffi.

I don't think there's anything Taruffi didn't do. (Including completing a PhD in engineering while winning motorbike championships, and later going on to design cars, break records, and compete in the occasional Olympics. Slacker.)