Jim Hall and his mighty Chaparrals ( Part two - The 2 E ) 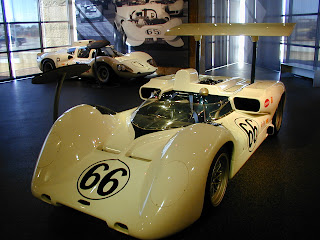 Built for the new Canadian-American Challenge Cup, or "Can-Am", the 2E earned instant fame as the first car to carry a high wing which generated and applied downforce directly onto the rear hubs. This innovation dramatically increased grip to the tires. The added grip helped the car to corner faster, and brake and accelerate more quickly than its competitors.
Like previous Chaparrals, the 2E used an automatic transmission and did not need a clutch pedal. In its place, the Chaparral team installed a foot pedal to control the wing. With his left foot, the driver could hold the wing in a flat low-drag position when accelerating on high speed straight sections. When cornering, the driver released the pedal, which moved the front of the wing to a downward angle. This added downforce through the corners and provided drag to help slow the car. In addition, the pedal controlled the airflow in a tunnel at the front of the 2E to provide a balancing aerodynamic downforce on the front of the car.
"It was time to get the wing off the car and onto the suspension. No one seemed to agree with me at the time...  I guess we eventually changed a few minds." -  Jim Hall
Posted by Steelworks at 5:02 AM

Lest anyone forget, that innovation quickly migrated to F1 and launched the era of aerodynamics for GP racing.