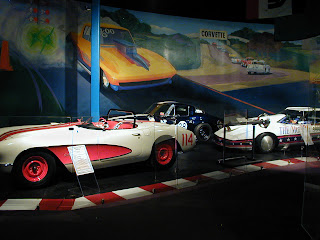 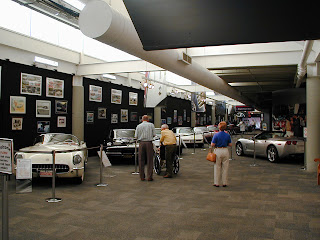 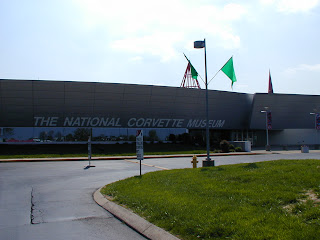 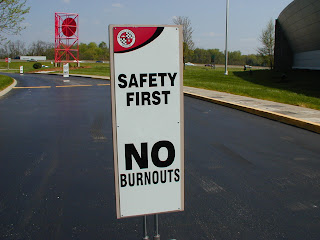 For those of you who have wondered about the Corvette museum in Bowling Green, I thought I'd take a post and fill you in as best I can.
Lucky for me I'm about 65 miles south of this place and can not only visit it often, but can also take in the various motorsports events that happen throughout the year in Bowling Green. One of the towns main attractions for me is the time capsule straight out of the '50s quarter mile that they have there...  but that's another story.
The Corvette Museum gets two thumbs up from me. I really enjoy this place every time I'm there. Of course they have many great cars on display, but they do a nice job of giving the cars a natural environment backdrop in several different theme'd rooms. My favorite of course is the Corvette race cars from all eras that are displayed in formation all around the rounded back wall of the museum complete with racing scene murals painted behind them. With a revolving door of cars coming in and out throughout each year, it pays off to go back and visit periodically. In fact, I stopped in on a whim a few years ago and got to see the restored "Purple People Eater" while it was there on display. A great car with great history; a '58 or '59 Fuel Injected big brake car that driving ace Jim Jeffords from Chicago drove to two SCCA B-production championships in '58 and '59. He even took the car out to the west coast races in the late '50s to run with Bondurant, MacDonald, and the rest of the So-Cal big boys. In addition, I can't remember a time I'e stopped in when they haven't had an original Z06 in attendance. Last time it was the white ex-Mickey Thompson car that not only road raced but took to salt at Bonneville.
A very nice theatre is also there showing a very well done documentary film on the history of the fiberglass bodied mark. Looping all day long. Of course you have many engines on display as well as a Corvette hall of fame featuring tributes to the men and women who helped make the car what it is today.
But for my money, the most important thing in the entire building is an old yellowed piece of paper. It sits in a glass case, well lit for all who want to press their noses. It is the typewritten letter from Zora Arkus Duntov to Chevrolet Chief engineer Ed Cole entitled "Thoughts pertaining to youth, hot rodders, and Chevrolet". The letter is dated December 16th 1953.
The nut shell of the story is that Zora had just returned from Speed Week at the Bonneville salt flats and was blown away by the size of it, the number of competitors, and the great advances being made in performance by young hot rodders. But mostly, Zora was concerned with the lack of Chevrolet presence out on the salt and hot rodding in general. A brave and persistent Duntov ( who had been hired as an assistant engineer just months prior ) outlined for Cole his thoughts on the matter and they are nothing short of brilliant. Zora had an amazing ability to see into the future and read how Chevrolet could be a part of it.
By first outlining to Cole the size and influence of the hot rod movement, he then went on to explain the natural progression that would inevitably take place with kids who grow up on Fords and Ford performance and how they'll of course gravitate to purchasing new and newer Fords as they age. He pointed out that it was in no way more complicated than the simple fact that Ford had made a great V8 with interchangeable parts that the high performance aftermarket saw as the most obvious choice to build hop-up parts for. Therefore the kids were given no choice but to go with Ford.
Where Zora would eventually go with this is nothing short of a turning point in high-performance history as big as we would ever see in our lifetimes. And I really don't think that is an overstatement. Zora mapped out reason after reason why Chevrolet needed to immediately begin development of an OHV V8 engine. His guidelines for what he felt this design had to contain and achieve is a spot-on description of what the Chevrolet small block V8 would come to be known for. He stressed the following; it had to be lightweight, it had to be simple in design, it must be fuel efficient, and it must make good power for its size and take to modification exceedingly well.
As we all know, Cole listened and the rest is history. In 1955 the brilliant and timeless Chevrolet small block V8 was introduced in 265 ci form and would go on to be possibly the longest running unchanged V8 design in automotive history. Of course to us it's the holy grail of small sized V8s for building obscene amounts of reliable power at a very low cost. No matter what your allegiance, I think it can be agreed by most that it has had the largest impact on hot rodding, racing of all kinds, and motorsports in general. I honestly can't imagine how different our sport and hobby would be had they not gone ahead with Zora's plan. Obviously something else would have come along but it's hard to imagine that it could have been done as "right" the first time.
P.S. If you'd like to read Zora's letter in its entirety, go to the Corvette action center website and check it out.
Posted by Steelworks at 5:00 AM

It always amazes me when a single piece of evidence can be found, particularly something physical, that is responsible for such a broad and extensive tumbling of dominoes. How many races were won due to this letter? How many cams swapped? Heads ported? Tires burned off? Intakes cast? Dollars spent? School week evenings consumed? Magazines sold? Races attended? Gasoline burned? Babies delivered? Taxi rides given? Marriages begun? Marriages ended? Friends made?

My and my brother's own piece of OHV Bow Tie history should be burning up the strip come March.