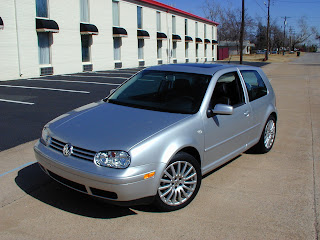 Well, here we are. Day one of the real drive out west. The past three days have been mostly short jaunts. Last Thursday had me leaving Nashville for Springfield, Mo. to play a show there that night. The GTI worked flawlessly, of course, and gave me a real appreciation for how far the car has come in the years since I owned and drove them. Even as nice as my '91 was, it was nowhere near as fast, quite, and solid feeling. The turbocharger on the 1.8 is really the business. The car runs and drives a lot like my '91 when your foot is out of it, but when you want the HP to bump, just press a touch more and the whistling little turbo kicks in and you're off...  feels smooth as a turbine, and sounds like one too. What a great great modern car, and so much car for the money. I'm a fan for sure. If there wasn't a Mini Cooper S, this would be the only choice in the high-performance box'y hatchback, in my opinion.
The next two days of driving consisted of a run from Springfield to OKC, and then on to Dallas. Short drives that we're mostly uneventful...  except for this amazing discovery out on I-35 between OKC and Dallas.
I'll be honest with you, I really didn't think things like this existed anymore. I've seen a few of these advertised over the years in Hemmings, but I thought they were mostly picked over and gone. This place had a lot of life ( parts and restorable cars ) left in it. I didn't see the yard until I was mostly past it while making my way down 35 towards Dallas running about 78mph in a 70 zone. Fortunately I was making good time and was able to take the next exit and run back to give this place a quick once over. When I did get back there and began to pull in to the long drive that bordered the yard I quickly realized that there was a pretty good bonus going on behind me- an eight mile drag strip was running about 100 yards away and it was packed with weekend drag racers lining up to do their 7,000 rpm burnouts and eight mile blasts. A nice back-drop to this boneyard from days gone by.
As you can see in the photos, this really is an astounding place. How very unfortunate that it wasn't open. I would have gladly paid the $5.00 to walk the yard and really take in what treasure was hiding away there. I never thought I'd get to see '57 and '58 Chevys in mostly complete condition sitting in a wrecking yard. This is the kind of stuff that my Dad got to experience. And because this was south Oklahoma, these cars were in remarkably good condition body-rot-wise.
So there you go... discovery number one from the great spring road trip. For the record, I've stopped off for the night in Midland, Texas.( Come on sports car guys, who is from Midland? That's right, Jim Hall and his wonderful Chapparel race cars ). Fortunately there is a museum located here that is dedicated to Jim Hall and his accomplishments. Of course I'll be visiting it in the morning and reporting back for tomorrow's post...  so please, check back for that, and as always...   stay 'tuned' !
Posted by Steelworks at 5:00 AM

When I was a wee lad my father took me to many a Can Am race at Road America. I always loved and cheered for the gleaming white Chaparrals (though they always lost to the McLarens!) My father is a Texan & a sports car nut... and somewhere I have a photo of him sitting (in a coat & tie no less!) inside the Chaparral 2E with a huge grin on his face. I'll have to dig that up and post it on my website.