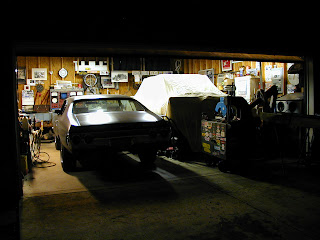 Knowing Nashville weather, I'm sure it will leave as quickly as it arrived, but for most of the day today it truly felt as though spring had sprung. Even the smell was in the air as I spent the day outside enjoying mid 60s and sunny. When I got up today and realized what the weather was going to do I was immediately excited because mid 60s and sunny means one thing to me... a shop day with the door open.
That would be the overhead door. It doesn't sound like much to some, but after having spent the past few months working out there with the place closed up, heater on, and no windows to tell you if it's still light out, having the door up and open is completely transforming for my little shop. The added bonus also being the fact that with that simple move the shop feels twice as big. And as you can see by the photo taken tonight of what it looks like when everything gets put away at the end of the day, it's nice to at least 'feel' like the place is roomier. Even if it's just for the day.
Unfortunately it sounds as though the cold hasn't given up completely and will be returning tomorrow. Oh well, like I said, it was a nice thing to have for a day.
Lastly, I want to thank all of the folks who chimed in on the race driver trivia. I'm sure it will sound trite and corny, but there really is nothing better than running across like minded folks who speak the same unique language that you do. I might go as far as saying that it's heart warming. It also gives me a good chuckle to know that I'm not the only maniac who has spent way too much time collecting way too much information about this sport and hobby that we all love.
Speaking of comedy, I only just realized that all of the photos that I posted were labeled with the drivers name! This would only show up when they were clicked on and enlarged but either way it certainly takes some of the sport out of it. Apparently not everyone was enlarging the photos, as I didn't get an immediate 100 point score from the downbeat, so it didn't completely give it away.
To quickly summarize, we had 6 photos of race drivers mostly in cars that they had great success in. We had of course the great Juan Manuel Fangio in the iconic 1957 Maserati 250F that he won his 5th and final world championship with, we then had the great Sir Malcolm Campbell at the wheel of "Bluebird" running on the sands of Daytona... a car/driver combination that would establish an amazing 301mph land speed record in 1935 at Bonneville, followed by the great John Fitch at the wheel of the beautiful Cunningham C4-R. The next page of course showed the famous photo of Barney Oldfield at the wheel of Henry Ford's 999 racer with a young Ford standing nearby. The next photo up surprised me in that no one even took a guess at this ( what happened to our drag racers out there? ). Admittedly, it's probably the most difficult of the bunch because of the style of shot and how little information it gives you, but anyone who knows drag racing should know this car and its driver...  the late great Big John Mazmanian and his incredible blown small block candy apple red '61 Corvette. This would have to go down as one of the top five most beautiful full bodied drag cars of all time. Sometime in the future I'll try and post some full shots of this car in all its glory. Just stunning. I had the pleasure of seeing this car in its restored condition at the Wally Parks NHRA museum some years back and it's everything you'd think it would be, as Mazmanian was famous for building race winning machinery that was equally show winning. And last up, another solid axle Corvette. This time a 1959 fuel injected big brake example being driven by none other than Bob Bondurant. BB had tremendous success in this car in the hard fought Cal-Club/SCCA Corvette racing scene of the late 50s and early 60s slugging it out with guys like Dave MacDonald and Andy Porterfield. Amazingly, this car still survives to this day and is vintage raced regularly by Monterey Historics founder Steve Earle. And as we all know, Bob Bondurant is alive and well and continues to run one the finest high performance driving schools in the country outside of Phoenix,Az.
Again, I hope you all enjoyed participating. See you tomorrow!
Posted by Steelworks at 5:00 AM

We were blessed with some 40-plus degree weather up in Indiana this past weekend, making Sunday a decent day to be out in the shop, if not with the door up. At least I didn't have to burn as much propane.

The time was well utilized. The tranny's all bolted up to the crossmember; radiator, fan, shroud, etceter are all in place; and it was determined that some small parts had to be ordered; oh, and we broke a couple things just for good measure.

Nothing like a day in the shop. We'll be ready when Raceway Park opens in March, I expect.