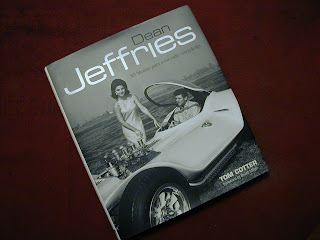 If and when I find something that really knocks my socks off, I hope it's OK that I use this forum to endorse it. There's nothing in it for me other than feeling like maybe I turned someone onto something that they otherwise might not have found. I know I'm always curious about what other gear-heads are watching, reading, following etc. It's a big old world out there and a lot of stuff gets released daily and can sometimes fall through the cracks. Especially motor-books, as they aren't likely to hit the NYT best sellers list very often.
This fresh off the presses release from Tom Cotter ( of Hemi/Cobra in the barn fame ) is one that I wish would hit the best sellers list. In the book, Cotter does so much good in so many ways that it's hard to know where to start.
Dean Jeffries is probably not a household name to a lot of gearheads who aren't die hard custom car or hot rod fans. But he should be. Dean has always been the kind of guy who was too busy with his head down in his shop to really attract a lot of fame and attention for his work. He chose to let his work do all of the talking. Unfortunately, over the years there have been many points of interest in the Jeffries legacy that have been turned and twisted and just flat out wrongly told. And again, because of Dean's personality, he didn't pay much attention and wasn't really interested in speaking up and correcting people. Well, that's where this book comes in.
In a completely neutral and direct way, Tom Cotter finally corrects all of the false information that has surrounded some of Dean's most famous work. He simply gives you the facts; backed up by shop schedules, timelines, photographs, and finally Jeffries' own memories, and lets you see the hard evidence that a lot of so called "Barris productions" are in fact the creations of one Dean Jeffries.
Of course no one is here to criticize the great work of George Barris or any of the fantastic custom cars that he created. We all know of the groundbreaking custom work that came from that shop, and how it continues to influence today's builders. It just comes back to the two radically different personalities we're dealing with here. No one could possibly deny, Barris included, that there has ever been a better self promoter in the hot rod and custom car world than George Barris. And good for him. It made him the household name that he is today and is directly responsible for the additional success that Barris Kustoms has enjoyed beyond what the cars were saying. But you have to remember that, all the while, there was Dean Jeffries...  head down, working away.
I don't think it can ever be determined, exactly, how so many of Dean's creations got credited to Barris. They just did. And once those stories took off, they became part of the history of hot rodding and custom car building. Throughout this wonderfully comprehensive look into Jeffries' life, we not only experience the record being set straight, but we get to ride along as Cotter takes us through the life and times of this phenomenally talented artist's life.
It is truly awesome ( in the most literal meaning of that term ) just how many things Dean accomplished, how many varied parts of the car world he was involved in at one time or another, and how incredibly humble and carefree he is about it all. To this day he has an almost,"Well, anyone would have done this had they been put into the positions I was. I was lucky." His attitude goes beyond understatement.
Even for the folks who are familiar with Jeffries, there are some guaranteed surprises. His involvement in the film industry was a much bigger part of his life than I certainly ever knew, and I know that his direct involvement and influence on the Ford GT40 project will come as a surprise to many. His early days working for Barris are wonderfully well documented and photographed, thanks to Barris and his love for the media, as many crisp color photos are used throughout. The look into the immediate post-war So-Cal years of custom car culture is fantastic as well. The shenanigans and comradery that went on and were a daily component of this very small world are wonderful to read about. It will definitely make you want to travel back to that much simpler time as you read along.
And right there in the middle of it was Dean Jeffries. A guy who really had it all. So much talent, so many different abilities, it feels in the book as though it may have been hard for him to stay with a single goal for very long. Movie star looks, the obvious customizing talents of striping, painting, and metal working, an expert race engine builder, and many say the driving talents to have been a champion on the biggest of racing stages, Dean Jeffries lived many lifetimes. And thanks to this wonderful new book by Tom Cotter ( complete with a touching forward by collector/preservationist Bruce Meyer ), we can finally all be brought up to speed on this amazing man's life, and Dean Jeffries can finally have his record shown and set straight...   its been a long time coming.
PS...   tune in to Monday's post where I will take you through the day that I was fortunate enough to spend with Dean about 10-12 years ago. I'll post some photos from the experience and tell some tales of what I learned from, and about, this great man.
Posted by Steelworks at 5:00 AM