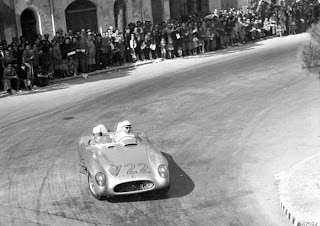 Just as the approach of the month of May means "Indianapolis" to the American speed enthusiast, the coming of March means the "Mille Miglia" to the Italian speed enthusiast.
Now run as strictly a historic event, the Mille Miglia ( Italian for 'thousand mile' ) was once an annual flat-out speed contest for the greatest drivers of the day.
First run on March 26, 1927, the great thousand mile race started in the small northern town of Brescia, wound its way down to Rome and back to Brescia in a large, almost figure 8 shape. The entire race was run on public roads that ranged from mountain passes to narrow country two lanes and ran through several small villages and towns. In the tradition of the great Targa Florio, the Mille Miglia was a serious test for man and machine.
Looking over the entry lists from the 24 years that the race was run you'll see both the greatest driver's names and the greatest manufacturing marks in our sport's history. Nuvolari, Varzi, Fangio, Tarrufi, Ascari, Moss, Collins, were all there. In spite of the fact that the grid was usually dominated by the great Italian manufacturers like Alfa Romeo and Ferrari, what most consider the greatest Mille Miglia drive ever, and easily one of the greatest drives in the history of motorsport, was accomplished by Stirling Moss in a Mercedes.
In 1955 Moss and his co-pilot, the great motorsports journalist and historian Dennis Jenkinson, covered the thousand miles in an astonishing 10 hours and 8 minutes averaging just at 100mph for the entire race. Unfortunately, two years later the race was stopped for good when Ferrari pilot Alfons de Portago and his navigator were killed, along with 11 spectators, in a high speed accident near the town of Guidizzolo. In 1977 the race was revived as the Mille Miglia Storica, a several-day historic event for 1957 and earlier sports and racing cars.
Posted by Steelworks at 5:00 AM

Note the wad of vegetable matter (straw from a roadside bale I suspect) lodged in the 300SLR's snout. Legendary drive indeed.

Yes, a harrowing drive indeed. There are so many heroic stories about the experience these two giants had while on their ten hour high-speed journey, but one I heard recently was new to me; Dennis Jenkinson was interviewed at the very first Goodwood Festival of Speed and recounted a tail of how, about half-way through the race, he lost his glasses. Apparently from looking down most of the time at his brilliant paper rolled map, he was constantly getting nauseous. His way to deal with that was to simply turn his head and let the vomit go out the back of the car over his shoulder. Eventually he did this at the wrong speed ( was there a right speed ??? ) and the air got behind his glasses and shot them off his face and out into the landscape. Moss said he tried for the rest of the race to block out the fact that his navigator was nearly blind without his glasses.