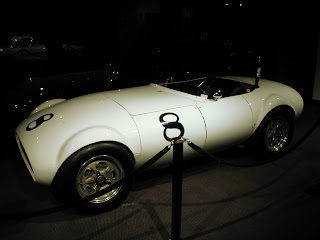 One of my favorite things about 1950s sports car racing in the U.S. was the phenomena of the American special. Without question these were the hot rods of sports car racing. I refer to this as a phenom because I truly believe that the idea of building your own sports racer from scratch and having it be competitive could have only happened during this time period. Before the war the machinery that race constructers were building was simply too sophisticated and beyond the scope of most any production vehicles in technology, materials, and performance. In other words, there was nothing to borrow from. Pulling parts from the Ford parts bin was not going to help you compete against a Bugatti Type 35 or a pre-war Alfa Romeo. And by the time the 1960s came along, race car technology had become more and more reliant on wind tunnel testing and aerodynamic development, which, because of its huge expense, forced the sport into accepting the pursuit of big time sponsorship as part of the game- an unavoidable component of big time racing that is felt now more than ever. So once again, the backyard racer was pushed out of the big leagues.
But for a short period of time between these two movements, highly modified American V8s were able to produce enough reliable power that, when placed in a smartly constructed chassis, could run with the most exotic machinery Europe had to offer. Many famous names and famous cars surface when thinking of this. Of course the Ol' Yeller cars of the brilliant Max Balchowsky come to mind immediately. True American ingenuity packaged in a purposely unattractive wrapper that showed their tail-lights to many a Ferrari back in the day. Then of course you have what were probably the finest built and most beautiful of all American specials... the jaw dropping and highly competitive Scarabs built and financed by Lance Reventlow. On shear beauty and craftsmanship these are hard to beat with any competitors offerings.
One car that filled the gap between the Ol' Yeller and the Scarab would be the lovely little Troutman-Barnes special. A truly magnificent American special that I've always felt never really got its due respect. Of course if you were around the Cal-Club, and later the early days of the west coast SCCA, race scene, then you would have definitely known and respected this car.
Working on the car in their spare time in Troutman's one car garage, Tom Barnes and Dick Troutman took the knowledge they were gaining as full time Kurtis-Kraft employees and turned it towards building a sports car. Some of the advanced features that they built into the car include a fully independent front suspension of their own design, a hand formed aluminum body laid over a tube frame ( also of their design ), and home made rack and pinion steering. Although a Merc flat-head was originally run in the car with period speed equipment, it was later fitted with a more competitive 335hp Thunderbird engine complete with Hilborn fuel injection. Its final incarnation, and most competitive, had it running a trusty small block Chevrolet V8.
American race driver Chuck Daigh drove the car in numerous races with a fine first place overall in the 1957 Santa Barbara event. Having Daigh in the car with Troutman and Barnes as its overqualified crewmen, this 3 man team was the picture of efficiency and soon attracted the attention of an aspiring American race car constructor...  the aforementioned Lance Reventlow.
In 1958 Troutman and Barnes sold their special and went to work full time for Reventlow Automobiles, where they would go on to design and construct the fabled Scarab race cars. And who do you think was right alongside them, helmet in hand, waiting to hop in and win race after race in the new Scarab sports cars...?  well none other than their old pal Chuck Daigh.
Posted by Steelworks at 5:00 AM

I know very little about vintage sports car racing, so these posts are always fun and informative for me. That's a gorgeous car. It is too bad that privateers are unable to field a vehicle in today's racing climate. A lot of creativity was encouraged through that.

Troutman and Barnes and Chuck Daigh--what a team; please build some more T-Barnes Specials, just for the old times..