Jim Hall and his mighty Chaparrals ( Part two - The 2 D ) 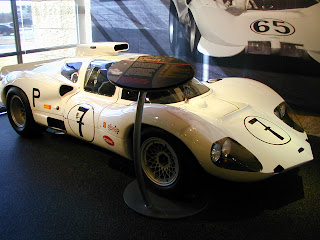 In 1966, Chaparral debuted the enclosed version of the Chaparral 2 for the World Manufacturer's Championship races such as Sebring, Daytona, and the 24 hours of LeMans. While finishing only one race in 1966, the 2D won the 1,000 kilometer race at the Nurburgring in Germany; a race many consider to be the greatest endurance race in the world.
Chaparral cars experimented with many different shapes with the 2D to increase airflow and decrease drag. Many of these designs would be signs of things to come in the many aerodynamic advancements used in future Chaparral designed race cars.
"The 2D was basically a closed version of the Chaparral 2 with some more advances made in cleaning up aerodynamic drag and getting higher top end speeds on the faster circuits. We continued also to run our proven 327 ci aluminum Chevy V8 with great success." -  Jim Hall
Posted by Steelworks at 5:01 AM