Jim Hall and his mighty Chaparrals 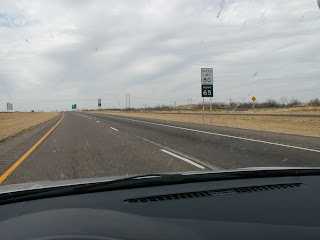 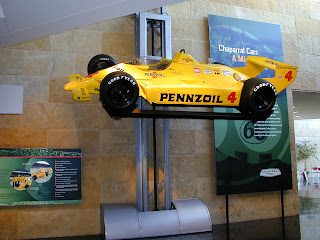 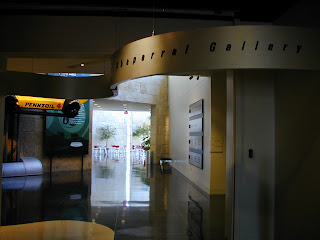 Sometimes things just go your way. Of course, you can't bank on it but it sure is nice when even the little stuff just seem's to hit like a song. This happened to me this morning.
I stopped off on my road trip last night in Midland, Texas for an overnight rest. Being a Jim Hall fan, and fan of the golden age of sports car racing in general, I knew about the small museum in Jim's home town of Midland and had always wanted to see it. I hadn't really gone to any great lengths to have this time out that I would end up in Midland for my overnight stop, I just kinda looked at the map, thought about my schedule, and casually assumed I would be able to stop by one way or another. Midland is a small town and I figured if I didn't stop there I could at least try and make it through in the daytime while the museum was open.
Well, as you can see it all worked out. The crazy part of this story is this; I took the second exit of three just by chance and drove into town to look for a decent hotel. Because Midland is so small, and they have so few hotels, I guess they feel they can fleece the friendly traveler and ask $149 for a single room at a mid-level hotel- because that's exactly what they were doing. Just based on principle I walked out of the first two I tried, even though they both told me I wouldn't find a better deal. They were kinda right too. I drove all the way back out to the Interstate and got a room at a Comfort Inn. The price, $135.00. Unbelievable!
Anyway, it was up early the next day to locate, and make a quick visit to, the Jim Hall Museum( actually it is a separate wing of the Midland, Texas Petroleum Museum ) and get back on the road. Again, I had been hearing about this place and was excited to see it. On my way out I went by the front desk on the off chance that maybe they knew of it and could point me in the right direction. When I asked, the girl looked at me strangely, pointed out the window behind her, and said,"You mean that place." That's right, I had taken a room at the only hotel in town that had an actual view of the museum! Unbelievable! - but this time in a good way.
As you can see, this is a small but impressive display of the great cars that Jim Hall's genius gave us. I try not to throw genius around loosely, but if anyone from this era of motor racing qualifies it would be Jim Hall. Don't take my word for it though, check out some of these quotes;
"The Chaparral was the greatest car that I ever drove anywhere, at anytime during my career." - Phil Hill
"It was absolutely fantastic. I could drive his (Jim Hall's) cars deeper into the corners and come out faster than in any other car that I drove at the time. It was just bloody amazing!" - Sir Jackie Stewart
"We never knew what would come out of his shop. Every time we came up with a new idea, we'd find out that Jim Hall had already been doing it on one of his cars." - Bruce McLaren
"There's no question that with Jim's mechanical capability, plus the fact that he was a great race driver, he helped set a trend. He probably started the greatest movement in auto racing with wings and wide tires." - Roger Penske
I feel like that should cover it in case there were any doubters.
With this post I'd like to just throw up the photos that I have to give you a feel for the display and the cars in attendance. I'll happily get into more specifics on both Jim Hall and his Chaparral cars in the next post.
Enjoy!
Posted by Steelworks at 5:00 AM

As a youngin' Chaparral was a name I "knew", even well before I knew much about cars and racing. The first slot-car I had was a Chaparral and I modified the hell out of that thing (gummy tires, hand-wound motor). A few years later my favorite driver Jackie Stewart drove their fan car in the Can-Am. Very cool to see this. Keep up the good work David!