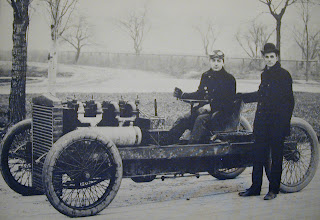 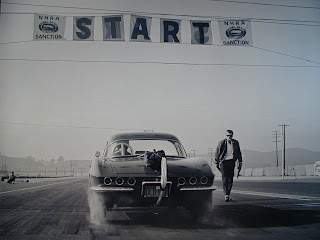 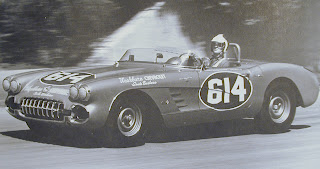 Posted by Steelworks at 5:01 AM

Barney Oldfield (and Henry Ford),
The other two I can only guess: Vic Edelbrock Jr? Phill Hill?

Well done on the Oldfield/Ford 999. We still don't have the others. Lets see if someone else can chime in. Thanks for being involved.

614 'vette is Bob Bondurant. Looks to be his so cal "B" production title just before launching into europe with cobras. That would put it about '63.

Well done again! Especially with the Bondurant stuff from anderst5. I would have to ad though that the photo is probably from slightly before '63 (This really is nitpicking isn't it?). Bondurant remained a Corvette racer long enough to see and race the new for '63 Stingray. In much the same livery as the '59, his new Z06 was again sponsored by Washburn Chevrolet and sported the number 614. In fact, this car has survived and currently being vintage raced by Vic Edelbrock Jr. The 1959 car also survives and regularly vintage raced by Monterey Historics founder Steve Earle.

Lastly, Bondurant made less than a handful of races in the new '63 Z06 Corvette as he was competing with the new Cobras and could clearly see the writing on the wall. Several Corvette racers of the day had no choice but to jump ship to Cobra, including Bondurant and Dave MacDonald.