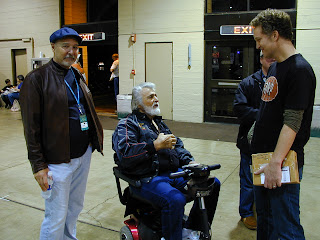 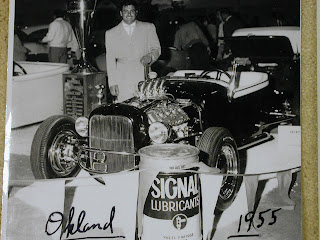 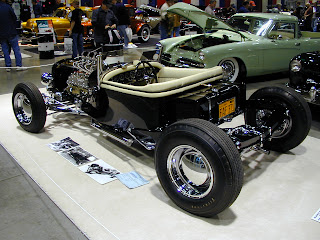 OK, now this is really what it's all about. So imagine you're walking the buildings at the GNRS and you make your way into the "Oakland's past winners" building, displaying a sampling of the winning cars from 1949 to present. Then, say you come to Blackie Gejeian's "Shish Kebab special" which was the Oakland winner in 1955... a completely restored car made up entirely of all its original bits. What if the car and its display leave you with some unanswered questions? Well, you're in luck because you are at the GNRS and chances are if you walk the buildings long enough you'll see the one and only Blackie Gejeian in the flesh and can walk right up to him and ask him yourself.
For the record, that's exactly what I did and boy was I not disappointed. I shot the above photo while my friends, author Robert Genat and former American Hot Rod foundation historian Henry Astor, and I stood and talked ( mostly listened ) with Blackie for at least a half an hour. Blackie thrilled us with stories of the old days by the dozens and, unfortunately, there isn't a single word from any of them that I can repeat here.
For the record, Blackie built his car in 1945-46 and it has never left his side.
Posted by Steelworks at 5:04 AM

You got to hang out with Robert Genat? That guy has done some of the coolest work! I have one of his Hemi books sitting by my bedside, gift from my drummer. His photography is outstanding. I envy his portfolio.

Hello, great pictures, Blackie is a great guy, I have had the pleasure of speaking with him a couple of times. Where did you get the photo from 1955, and who captioned it? Reason for my asking is that I have a photo of our uncles roadster (Ray Anderegg) and the scene actually matches the Fresno Autorama in 1955. Just curious, and would love to know if there are more photos. We in fact are building a tribute to our uncle's roadster. Thanks.