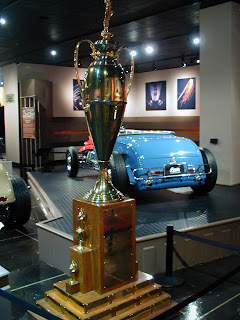 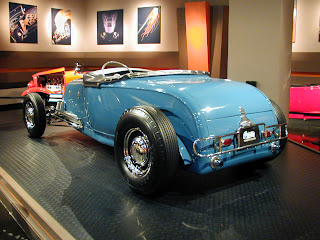 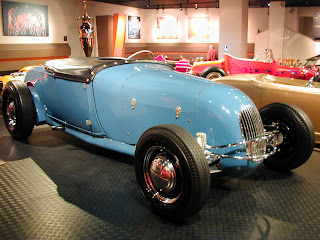 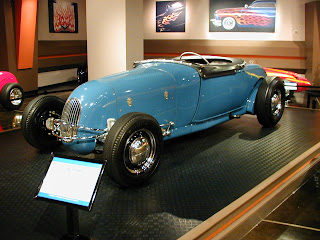 Well, it is hot rod week around here for me. All hot rods all the time. The upcoming 60th GNRS is responsible for this of course, and I'm hoping it'll be OK with everybody out there. We'll get back to changing it up next week...  maybe, but for now, this is where my head will be.
In thinking about the upcoming 60th running of the GNRS and being taken by the idea of this rather serious birthday that it will be celebrating, I'm thinking back to what it must have been like at the beginning- about the organizers and the moxy these folks had for thinking this would fly, but mostly about the cars. To go back in time and be able to walk that building and see what they really looked like, that would be a treat.
Fortunately in the last several years historically significant hot rods have been turning up and receiving top level restorations much to my delight. I've strongly felt for some time that these cars are as important to the history of the American automobile as any Duesenberg or Ferrari and should be found and accurately restored to save this great bit of the past while we still can.
Lucky for all of us, Jim "Jake" Jacobs ( of Pete and Jake ), realized this very early on. In fact, all the way back in 1971, "Jake" found out that the original Niekamp roadster was still around, was mostly intact, and was for sale. He not only was familiar with the car, but actually cared about its future- knowing full well that this was a legitimate piece of hot rod history. Take into account that during the early '70s, hot rodding had turned towards early glass body kit cars with fully independent suspensions, and were usually over-dressed with Model T-era brass components. No one was interested in old hot rods ( which accounts for Jacobs being able to buy it for a mere $1,800 back then ) with straight axles, and the flat-head was probably at its lowest point of all time on the popularity scale. All of these facts make it that much more impressive that a guy as young as Jacobs was at the time would see the importance of this car.
Well, he did, and with great passion and drive. In fact, Jacobs was so inspired that he took it home, thrashed on it nearly round the clock, and had it back on the road in 2 weeks. Once completed, and wearing a new coat of paint ( this time in regal red ), the car would shock the hot rodding world once again by appearing on the cover of the February 1971 issue of Rod and Custom magazine with the headline reading "America's most beautiful roadster returns from 1950!" The cover photo was even done in a "retro" style, much like the late '40s-early-'50s covers, depicting a young Jacobs and his father having just lowered the fresh flat-head into the car using an old A-frame style hoist in the family driveway. I guess you could say Rod and Custom beat the retro mags of today to the punch by about 38 years!  Inside, readers would find a story titled "Old roadsters never die" covering the return of the old Niekamp car.
Jacobs would go on to own the car for the next 30 years before it would be purchased by the late Bob Petersen for display in his Petersen automotive museum, which is where you can see the car to this day.
Without question, the saving of the original Niekamp roadster by Jacobs jump started the trend of finding and restoring these glorious old cars. Though it would be some time before this movement would kick into high gear, "Jake" had such high visibility in the hot rod world ( remember, he not only started the hot rod aftermarket parts company Pete and Jake, but was a writer for magazines like Rod and Custom ) that, I believe, he at least made people aware enough not to completely discard these old cars or modify them into oblivion. The Niekamp roadster was a bit of a signature for Jake as well, as he would routinely drive it cross country throughout the 1970s to events like the Street Rod Nationals.
I guess you could say that this car was a trend setter in two separate categories; It set the bar for detail, design, and craftsmanship for the indoor car show scene, and it inspired a generation of hot rodders to be the first to look back at the accomplishments of our sports' pioneers.
( Tomorrow we'll look into the story of the building of the car, Bill Niekamp himself, and this roadster's wild journey through many owners as it made its way to Jim Jacobs )
Posted by Steelworks at 5:00 AM

I looked at the photos and went "Niekamp," but then I thought it was in a different color at one time. Why does it seem like I saw it in black? Maybe I'm confusing it with Moal or Doane Spencer's cars? I just went looking for pics and couldn't readily find any.

Funny, these cars look so good to me now, but back when I was in high school I always thought, "Why did they put such skinny back tires on those things? They should have, like fifties on 'em!" Live and learn, kiddo. Live and learn.

Funny, I also used to look at this style of roadster with a bit of contempt because of the track nose. Though I'm still much more of a fan of the traditional grill shell look, I've really come around to these when they're done right and the Niekamp car is far and away the best in my opinion.