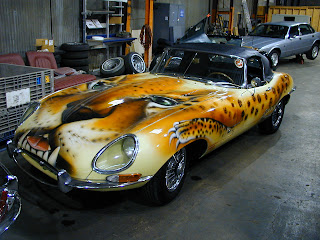 Well, this will have to go down as the sight of the month for me. All I wanted to do was stop into JD's Foreign car service here in Nashville, and say a quick hello to my friend Michael Huby. Michael is temporarily working there doing a major reconstruction on an Aston Martin DB2 and I've been enjoying watching the progress. Again, just a quick stop in, trying not to be too much of a time bandit....  and I see THIS!
My knee jerk reaction was confusion- I think you can understand. But, then I started noticing some very key tip offs on this car that it wasn't just an ordinary series 1 E-Type- albeit with one of the more hideous custom paint jobs I could imagine, and on a car that never needs any help. Hmm?, look at those tacked in hood vents, almost like they were an afterthought. How about these outside lower hood latches?, that's interesting. Yup, it can only be one thing. This is one of the first 500 E-Type Jaguars produced. A "flat floor" car, as they are called, and for obvious reasons if you've ever sat in one. Very rare bird and, outside of the lightweight and low-drag cars, this is the E-Type holy grail Jag for Brit car collectors. How strange. The paint job? What is going on here?
Just then Michael walks over. Of course he starts laughing and asks if I'm interested in having him lay down this paint treatment on my Chevelle. I tell him I'll pass, even though I think it would look better on my Chevelle than the Jag... especially with Cragars, runners in the front and 50s in the back with the rear-end air-shocked to the sky!!!  Yeah, 1975 baby! Oh, sorry, where was I?
So of course I want to know the scoop on this interesting piece. Well, I got more than I'd bargained for; It turns out that this is E-Type Jag #3 in the U.S. Yes, the 3rd car imported in after they were released. And amazingly, the paint on the car was applied when it arrived at the dealership. Apparently the dealer was so excited to have one of the first E-Type Jags in the country, that he couldn't help himself but to put this Jaguar painted Jaguar in his showroom as a promotional tool. That's right, it's 1961 paint. And wouldn't you know it, it's holding up quite well.
Well that was certainly not what I was expecting to hear. For some reason I had it in my head that some forgotten country star from back in the day, with a name like say...  Julie Jaguar, had this car dolled up to drive around music row and have there be no doubt as to whose it was. I mean, you know, off the top off my head that seemed reasonable. But one of the first E-Types in the country? No, never thought of it.
Posted by Steelworks at 5:00 AM

Yeah, man, my first thought was "rock star car," a classic that had fallen into the wrong hands by way of some auction. The dealer did this? I'm guessing he never ended up selling it as a new vehicle, as I'd think any customer would have had it repainted immediately. One wonders if he tried to charge markup on the custom paint job, further discouraging potential buyers.

It looks far more like a '75 paint job than '61 for sure. It's a bit unfortunate that it's standing up so well. It would be nice to have an excuse to repaint it!

I have a strong suspicion that (if the STORY is true) that this car is 785008, but without a look, or a photo of the data plate we'll never know. David, is there any chance you could convince the cartaker of this car to register the data plate details on XKEdata.com so it won't be lost to history?

It does appear to have had some level of restoration or repair at some point as that is a Series 2 soft top installed.

DAVID STEELE.
I don't know if you remember me, but I think you will when I remind you of how we fed each other grapes in Pikeville, KY. It's Rachel, the girl that you said reminded you of Natalie Wood.
Anyways, you gave me your number, but I dropped my phone in a toilet because I'm clutzy and now I don't have it, and wanted to say hello because the last time I think I talked to you was around Thanksgiving.
Anyways, if you read this, email me @ rchane00@pc.edu :)

Annnnnddddd. I hope you are having an awesome time.


And, so I don't leave an annoying oomment that doesn't relate to cars at all...THE CAR IS AWESOME. :) thanks. hope to hear from you.

Hi my name is Tanner im 15 and I found out the other day through Shane Williams that you graduated from BNL in Bedford, Indiana with my uncle, Tony Silvers. I just think its so cool that someone that graduated from BNL has gone so far. My mom graduated a year after you did She is Krista silvers. I have played guitar for about 4 years and love all the Gary Allen songs. Thanks for the inspiration. If you can email me back at tlwiley77@gmail.com.

I saw a steel strapping space here and I was surprised that they were doing the therapy to an old Ford Mustang. They lined the strapped on its two doors depicting a bar of chocolate. Then the steel banding seals the hood, also depicting another Swiss design. I later knew that this will serve as the main float for the upcoming Chocolate Festival.

David,
Jeremy, wilders friend from Ga. Here you are coming to the ATL on the 18th of Nov. I wanted to see if you might want to grab a bite to eat before the show like in Athens.

Please get the number and register it yourself on XKEDATA.com. Do not need owner. Get numver off the data plate. Curious to see if the story is true or another URBAN LEGEND>