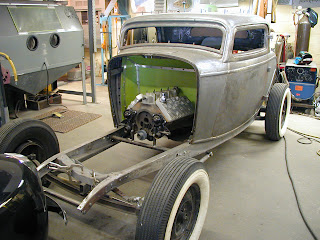 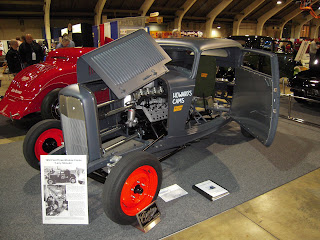 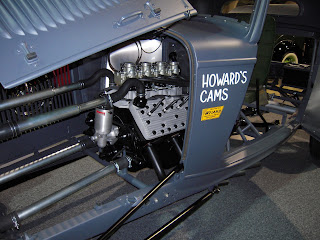 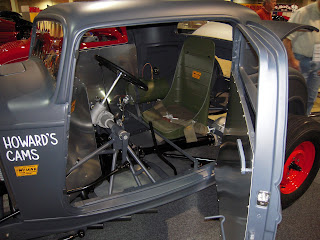 In an ongoing effort to bring you as much coverage as possible from the 60th running of the Grand National Roadster show, I've decided to focus on one more car that was in attendance before I leave the subject. But first, a little background on this car's original owner and builder Larry Shinoda.
Larry's name should be a familiar one to any motorsports or hot rod enthusiast. Having worked in the design departments of both GM and Ford, and Packard for a short time, Shinoda was responsible for the design of some of the most ground breaking and memorable cars that either of these manufacturers produced. He worked alongside Zora Duntov on the Corvette project and is said to have been instrumental in the design of not only the original '63 Stingray but also to have single handedly penned the Mako-shark, or 3rd generation, '68-'82 body style. After leaving GM for Ford in the late '60s, Shinoda would immediately shake things up over there by designing the '69 and '70 Boss 302 Mustangs. I guess you could say he left his mark on American car culture.
Born in Los Angeles in 1930, Larry was dropped into the world at the prefect time for a kid who would develop a love for the automobile. As we all know, the weather and culture in southern California made the ultimate breeding ground for new automotive ideas and gave these young inventors a natural proving grounds with the dry lakes. But life would not be without its complications for the young Shinoda. As the war was coming on in the early 1940s, the Shinoda family soon found themselves transfered to an internment camp hundreds of miles from their home in Los Angeles. Along with thousands of other Japanese American families that were placed in these camps to wait out the war, the Shinodas lost most of their property and financial security. Fortunately for young Larry his friends were wise enough to beat the authorities to the Shinoda garage and made off with his hot rod roadster that had been under construction. They stored the roadster at different car club members houses for safe keeping until the war was over. Not a proud moment for our country but at least the young hot rodders were thinking straight.
As soon as peace time was on it was back to hot rodding for Larry. He quickly finished the roadster he had started building and immediately became a fixture at every dry lakes meet from that point on. Shinoda was known for being very competitive, innovative, and fearless. As soon as the idea of drag racing came about, Shinoda was there too. Having gone through a series of cars, Shinoda now found himself building the ultimate drag coupe, complete with a radically set back full race flat head. This of course is the car in these photos.
Although the last several years of this car's life are a little shady, its 1950s pedigree is not. Not only did Larry Shinoda build the car and develop it to become fiercely competitive, but upon getting the news of his first design job, he sold the car to none other than Don Montgomery. Montgomery owned and raced the car for several years with many different engines before selling it in the late 50s. At that point things get cloudy. But fortunately for hot rod history, it was recently identified, saved, and brought back to life by Dave Crouse and his talented crew at Custom Auto.
As you may have read in a much earlier post, I was lucky enough to spend a day with Dave last year, see his shop, and check out all of the current projects they had cooking. The Shinoda coupe was one of them. As you can see by the photos, they did a great job with the car. And to prove how dedicated Dave and his crew are to preserving hot rod history for generations to come, they had the car nearly done just a few weeks from the GNRS where it would be making its debut...  and then suddenly, several period photos surfaced of the car's interior as it was when Shinoda finished it. This was a blessing and a curse, as they had finished the interior to the best of their abilities based on what little was left of it. What they were able to construct was very close to the way it was but it wasn't exact- and to Dave Crouse, it has to be exact. So, it all came out and the thrash to get the car done began and continued round the clock. As you can see they made it, and everyone who walked through building number one over the GNRS weekend was better for it.
It's always inspiring to see another historic hot rod saved and brought back to life so that we can all see how it truly was back in the day. Larry Shinoda built a very interesting and innovative hot rod, complete with a radical set-back and center steering, and showed the way early on that this way of thinking was going to be the standard for future drag cars and dragsters. In fact, isn't this car really just an early front engine rail with a body on it? From a chassis design and layout standpoint I'd say it is.
Of course, Larry Shinoda went on to prove that he could see farther down the road than most anyone else...  so I'm sure he knew all of this long before it would occur to the rest of us.
Posted by Steelworks at 5:00 AM