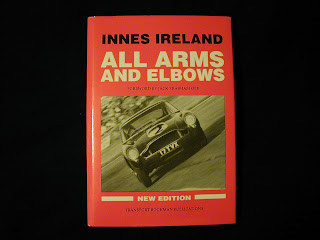 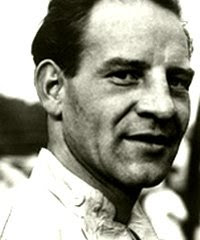 OK, maybe not required but certainly recommended reading for any enthusiast is the wonderfully entertaining Innes Ireland "All Arms and Elbows". First released in 1967, this colorful account of racing's golden era was an instant hit and became a cult classic soon after. Stories of serious premiums being paid for the book when it was out of print are legendary as collectors and historians clambered for original copies.
Seen by many as quite possibly the best human account of a motor racing scene ever written, Ireland's outspoken, almost painfully candid recollections take you so far inside the world of '50's and '60's international racing that you can almost smell the Castrol R...  and the pubs and bars for that matter.
Ireland once said of other books written by fellow racing drivers,"Most of them are about as interesting as a motor show catalogue." Well, he certainly didn't write a catalogue here. In the words of publisher Frank Stroud,"Of all the drivers who raced in the Moss-Brabham-Hill-Surtees-Clark era, Ireland had probably the noisiest, most hilarious, and easily the most hair raising career of all." In addition to the many detailed accounts of great races that Ireland took part in around the world are the equally detailed and honest accounts of the colorful social life that he and his fellow drivers enjoyed.
Where else can you get the full story about the bet placed to Augie Pabst as to whether or not his car's headlights would work under water?...  causing Pabst to hop into his Hertz rental car and drive it into the hotel pool to settle the wager, only to have Walt Hansgen dive in, get the keys from the ignition and swim around to open the trunk where he remembered his luggage was stowed! I guess you could say it was a different time in big league racing.
Fortunately for us, the book was put back into print in 1995 and re-released again in 2006 with additional period color photos, a new forward by Jack Brabham, and an intro re-write from Ireland shortly before his passing in 1993. The original text is unchanged and gives a whole new generation the opportunity to read about a truly innocent era in motorsport when drivers ate, drank and traveled together, were somehow each other's support group while maintaining spirited competition, and drove not for fame and fortune but simply for the love of the sport.
The following suppliers carry the new edition of Innes Ireland "All Arms and Elbows".
www.autobooks-aerobooks.com
www.motorbooks.co.uk
Posted by Steelworks at 5:00 AM