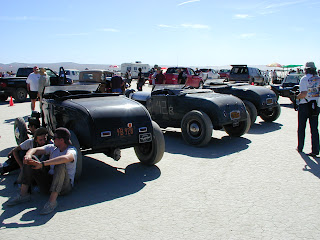 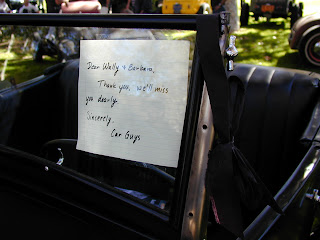 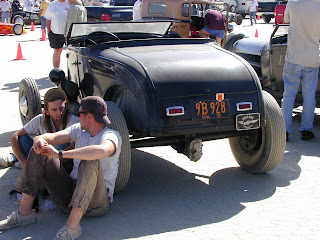 Man oh man, Thursday already. Or as the late great John Hartford once sang,"My oh my how the time does fly." Speaking of the late and great and flying time, I've been thinking a lot this week about the time we live in and what our generation's footprint will look like to future generations of motorsports fans. I think a lot of this has come up, and oftentimes does with me, because we lost another one of our legends of the sport this week with Jocko Johnson's passing. I can't help but think we're existing in an interesting time as we're the last generation to walk the planet with the actual pioneers of hot rodding... the one truly American motorsports creation. We are the transition team and I don't think we can give too much attention to this fact or the people who developed this sport for us, especially knowing how many of these folks are still out there, active, and willing to pass on their knowledge. To me it's a bit of a no brainer, and I can't think of a better way to honor our pioneers than to keep the history alive.
One man who is doing a whole lot for this cause is Steve Memishian. Steve is as avid a hot rod enthusiast and historian as you'll find and has a particular passion for what I was just mentioning earlier in this post... history. Several years ago Steve began to realize that no one was taking the time to sit down with any of the original hot rod pioneers to collect their stories and, sadly, they weren't getting any younger. Fortunately for all of us, Steve jumped into action and took it upon himself to single handedly start the American Hot Rod Foundation. At his own expense, this non-for-profit foundation was established in 2002 to preserve, promote, and celebrate the history of hot rodding.
Soon after the foundation was established, Steve assembled a staff which included documentary film maker Henry Astor and intrepid motorsports historian and racer Jim Miller, to go out and find every hot rod pioneer they could, sit them down in front of the camera, and capture their stories on tape... and they did just that. So far the American Hot Rod Foundation has collected hundreds of hours of taped interviews with some of the most legendary names in hot rodding. Even better news is the fact that Steve and his crew built a website around these pioneers and the interviews that they captured.
You can log on to www.ahrf.com and, for no membership or trial fee, browse through the pioneers page, click on a name, and watch a segment of their interview. It's a hot rod historians dream come true and is one of the reasons people have called Steve Memishian the "Tom Brokaw" of hot rodding. For all of us, he has helped to document the greatest generation in the history of American motorsports.
This post is dedicated to Bobby Meeks, Ray Brown, Ed Justice, Barney Navarro, Jocko Johnson, Chuck Daigh, Tony Nancy, Ak Miller, CJ Hart, Robert Petersen, and Wally Parks.
PS... I hope the three photos I'm including help to capture the spirit of this post. The letter to Wally and Barbara Parks I spotted taped to the windshield of a 20 something So-Cal hot rodder's roadster at last years Throttlers picnic in Burbank. The last two photos I took are of some equally young guys who were keeping the faith out on El Mirage drylake this past summer. If the background weren't visible in either of those shots, would you know what year that was? ... celebrating our history, what a great idea.
Posted by Steelworks at 5:00 AM