How much is your old Pontiac worth? 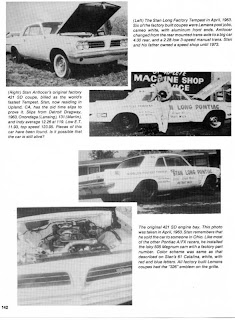 Hello, and happy Monday morning. As some of you musclecar guys probably already know, a tremendous story took place over the last several days involving a 1963 Pontiac Tempest, a friendly neighbor trying to do a good deed for an aging seller, and everybody's favorite world wide auction house EBAY. While trying to collect as much information as I could regarding the back story on this I found many chat rooms, blogs and musclecar debate clubs going round and round about what they had heard. After some continued sifting to see what didn't seem to want to fall through the hearsay bug screen I came away with what I believe is a pretty accurate nut shell... and it's a dandy of a story. Exactly one week ago a run of the mill, barn find condition at best, '63 Pontiac Tempest showed up on ebay motors. Nothing very eye catching about the car. Solid white with a blue interior, no drivetrain, and a sellers description so vague that it really only let you know that it put in some time as a drag car and had some spare parts in the trunk. Hard to say for sure about that last bit as there were no keys around and the best the seller could do was peak through the rear seat support. Now I can see how a lot of dedicated car guys would maybe keep walking but if you're a fan of early '60's factory backed super stock and A/FX racing, or better yet Pontiac's involvement specifically, the white paint and drag history are going to make you sniff around... and someone did right from the downbeat. Now I don't know for sure about this but I did hear from several sources that the posting initially had a "buy it now" price of $4,000. It is my understanding that a very knowledgeable and extremely upstanding historian of these cars recognized the VIN posted in the ad as one matching the long lost Stan Long Pontiac factory A/FX Tempest drag car! I don't know how many different ways a car guy can spell bingo, but I know this is one of them. The seller was contacted and was advised to take down his buy it now option immediately as the car was certainly worth a good bit more than the four grand. How much more? Well, I just found that out tonight about 45 minutes ago. How about $226,521! Not bad for a nearly forgotten old parts car. Now we can say that of the 6 factory lightweight A/FX '63 Pontiac Tempests that were constructed, 3 have officially been located. In addition, I think we can safely assume that there is one very happy, and probably still recovering from shock, ebay seller up in Michigan right now. So I guess this raises the question, how much is your old Pontiac worth?
Posted by Steelworks at 5:00 AM

I would love to make a copy of one of these cars. In many ways I like them more than some GTOs. I always liked the idea of ridiculous horsepower crammed into a tiny package, and these fit that bill oh so well.

Heard the rumor about this a few weeks ago, but hadn't seen anyone post the definitive work on it until seeing it here. Thanks for putting it up.