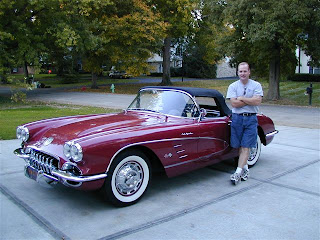 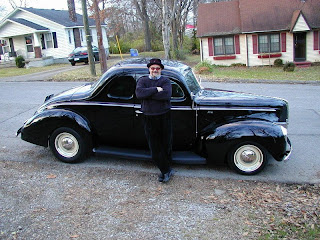 For the record, the 1960 Corvette pictured here is the Steele family example. As I stated in the post, my father owned this car for nearly 30 years before my brother took possession. By that time it was in need of a full restoration. I'm proud to say that I performed the restoration between 2001 and 2003 and its holding up well. It now lives with him and his family on the north side of Indianapolis where I'm happy to report it gets driven often and, thanks to my brothers love of speed, with great spirit.
The second photo is of my dear friend Al Bunetta and his very cherry 1940 Ford coupe. Al is one righteous guy and is an old school hot rodder from way back. He bought this car in the early 1980s when he found it languishing in a southern California hot rod shop. Al really likes to drive his cars and has been known to make last minute 500 mile runs for not much reason. Al and I go back to the days when I was playing guitar for the great John Prine. Al and John are longtime friends and partners in Oh-Boy records, John's record company, where Al runs the business and manages John's career. If you're looking for good music, look them up on line.
Posted by Steelworks at 5:01 AM