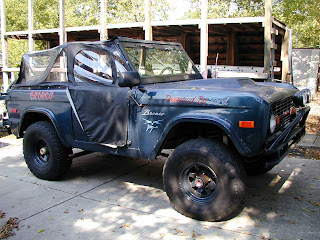 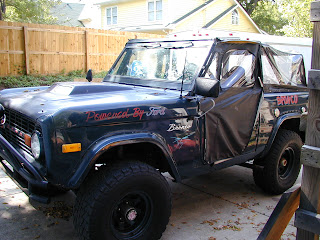 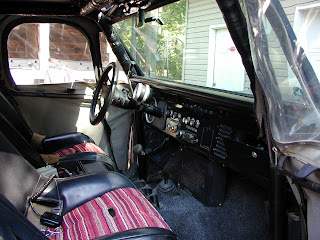 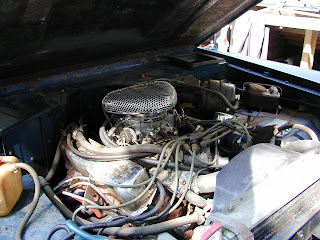 First of all, I want to thank a few folks who sent me e-mails asking about the Bronco project mentioned in my profile that I'm currently finishing . I hadn't intended on doing a post on it until it was done but I suppose the journey of a build can sometimes be as much fun as the driving... almost. I'm sure a lot of this interest has to do with the owner and that's OK, I won't take it personally when no one is interested in the stuff I'm building just for me. ( I think right here is where the younger set would type in "lol"? ) .
Yes it's true, I am building this for my boss. Very very dangerous I know. Nothing like showing up for work to have the first thing you hear be something like,"You know that Bronco you built for me left me stranded out in the middle of nowhere last night." We, of course, hope that never happens. Actually the truth is that Gary is so laid back about it all that I can't say I've really been anxious about that part of it one way or another. Must have something to do with his So-Cal ways.
Speaking of So-Cal, that is exactly where the history of this truck, and Gary's relationship with it, are from. I believe he's had this since he was in his early 20's and it was his main mode of transport for several years around Huntington Beach. About ten years ago, when his career started to get traction, he moved to Nashville and the Bronco went into storage back in California. A few years after that a gear head joined his band and began pestering him about the truck and that he should ship it out to Nashville and start driving it again. I'm sure you can guess who that was.
So here we are, a year or so after the truck arrived in Nashville and what started out as a tune up, check-over, make sure it's roadworthy, weekend project ( how many times have we heard this one folks ?) has turned into, you guessed it, a full blown restoration. My fellow wrench turners, when will we ever learn?
As the project has finally made its way to the 9th inning, I thought I would start at the beginning and post a few shots of it from the day it arrived at my shop from So-Cal, then in some upcoming posts I'll bring you up to present day and you can see for yourselves how far we've come. Stay tuned!
Posted by Steelworks at 5:00 AM