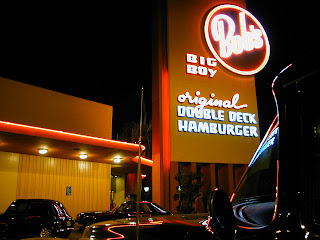 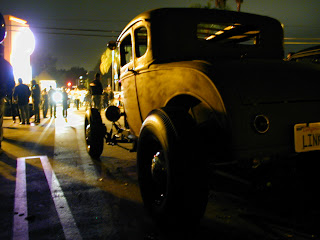 As you can imagine, I left southern California a couple of days later with a serious skip in my step. It's almost laughable now to think about it. I mean come on, I just met one of my heros and basically got to see behind the hot rod curtain. AND, speaking of that, I got to step out from behind the curtain on The Tonight Show. It was a pretty damn good time.
I returned to Nashville fully energized and ready to begin my journey to the next level of involvement with this whole early hot rodding thing. I honestly can't say if it entered my mind on the flight home, or maybe when I was inspecting Tom's original A-V8 roadster pick-up, but all I know is that I immediately started focusing on the idea of building an authentic hot rod roadster. After all, my research was now getting me closer to understanding what the traditional ingredients were for making one of these, and I had the best counselor you could ever ask for in my new friend Tom, to help guide me. I had been asking him specific questions about the building of one of these and he had the answer every time without hesitation. The problem was where to begin.
As I continued to stay in touch with Tom, I started to learn first hand about southern California car culture and how mind-boggling it is. I don't think this is a thing that could ever be exaggerated. Until you've spent some time around it you just can't understand the support and activity in that scene. There is just so much to see and do and participate in that it is overwhelming. Every day, weekends and week days, there is something going on. Oftentimes on the weekends you have to choose between 4-5 car happenings. There is a cruise-in somewhere every night of the week and ( and I love this ) several that happen in the a.m. on weekend mornings. Just imagine that? Morning cruize-ins! It's not enough to just have them in the evenings, they have to have them in the morning too. Of course there are the car shows, the swap meets, the race meets, the auctions, the rallies, the various club get togethers, some of those happening once a week year round. I'd have to say this was the first thing that I had to get used to when talking with Tom. Every time we spoke there was something else going on. And I'm not talking mundane stuff, I'm talking like,"There's a dinner tonight at the Petersen Museum that Carroll Shelby is hosting..."
It was always something. Of course that last example might not be on everyone's calendar because, as I was also learning about Tom, Tom was swimming in a pretty serious group of folks out there. Because of his many accomplishments, and having been in the So-Cal car world his entire life, he was naturally a member of this pretty elite group. Fortunately, I would never for a moment feel like he and his friends thought they were, in any way, more special than anyone else. Of course they were to me, but they didn't feel that way and they continued to act like the same speed crazed maniacs that they'd been their entire lives.
Sometime in the month or so following my initial meeting with Tom, I was talking with him on the phone, asking him question after question about the early hot rodding days, asking him more stuff about his career with cars, asking him about his old hot rod buddies who were still around, and began telling him my idea about building an authentic 1940s roadster. He perked up when I said this and knocked me out with the following,"You know, something must be going on with you young guys and this hot rodding business because I just saw a crew of young guys at Bob's Big Boy last Friday night driving old roadsters like we used to have. They were even dressed like we used to be." Whoa whoa whoa, what? What did he just say? I asked him to repeat this. He said,"Yeah, I couldn't believe my eyes. There must have been a half dozen or so of them that came to the Friday night cruise-in over there. I thought they must have been from a movie set or something but apparently this is something they're really into, just like you are."
Well this was some heavy duty news to me. I'd thought I was the only one my age on the planet thinking about this stuff. I mean, what were the chances that other guys my age had come upon this early hot rodding stuff at this time? Whoever these guys were I had to see what they were up to. As Tom and I kept talking he asked when I thought I'd be out there again. He said we could go over to the cruise-in on Friday and I could see this stuff for myself. I remember he added,"You should really get to know these guys. It sounds like they're doing the very thing you want to, with building a roadster and all. They must know where to find these cars and parts etc." Yeah, I couldn't have agreed more. I definitely needed to see what these guys were up to.
Pretty soon I was booking my first of what would eventually become many many trips out west to take in the amazing southern California car culture, and with the greatest tour guide imaginable. Within weeks I would find myself at Bob's Big Boy in Burbank face to face with some of the first players in what was about to explode into the 1990s traditional hot rodding phenomenon and would experience the biggest surprise of all as it pertain's to this whole early hot rodding interest of mine... I was not alone!
Posted by Steelworks at 5:00 AM