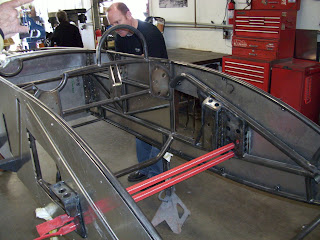 Before I start telling you about this amazing little weekend event I went to recently, let me say that I will be continuing the series on Tommy Sparks. Without a doubt, these writings have produced the most positive feedback I've received since beginning the Steelworks blog. It's a real joy for me to be going over those memories and apparently it shows. Thanks to all of you who've relayed your kinds words to me about it and you can look forward to reading part 4 very soon.
Now, on to today's post.
I went up to visit my Mom and brother Rob this past weekend in Indianapolis. It was to be a short visit, but I would be in on Thursday and there for the entire weekend...  so you never know. Well, as luck would have it, I got a call from my friend Roy Caruthers while on the road heading up 65. We were catching up on things when he happened to mention that the annual open house on gasoline alley was on Saturday. Now before we get confused lets be clear; the gasoline alley that Roy is referring to is actually Gasoline Alley Road. This is about a quarter or third of a mile long block that is no more than a half mile from the speedway. I believe the street name was instated sometime in the 1980s because the entire block on both sides end to end is populated with race car builders, fabricators, components manufacturers, and restoration shops. It really is a sight to behold.
Especially on this particular weekend. I don't know who got the idea to have this annual open house but I loudly applaud them. Basically the first half of Saturday was a combination hot rod show and shop tour. And as you'll see, the Indy folk do not screw around. The quality of car that showed up was impressive and the shops and the projects within them were nothing short of humbling.
The most impressive to me was getting to see the Automotive Hammer Art shop and their current projects. One of which was a serious life changer.
The car is the famous SuMar special. Built on a Kurtis Kraft chassis and running a Meyer-Drake 270 Offy, the car ran at Indy in 1955 and finished a credible 9th with Jimmy Daywalt at the wheel. This was done without the aid of most of the streamliner body panels, as Daywalt demanded their removal sighting an inability to see the front wheels as a serious hinderance to his driving abilities. Marshall Teague went on to perform record land speed runs in the SuMar at Daytona in 1959, but was killed two days later in the car while trying to up his record.
Currently languishing in a Daytona Beach auto museum, the original SuMar special is just static display these days that quietly tells the tale of a by-gone era when an independent team of innovators could come to the 500 track and shake up the norm. Fortunately for us the craftsmen at Automotive Hammer Art have not only the talent, but the client to make it possible for people to see a spot-on accurate recreation of the original SuMar special come to life.
The pictures will say more than I can. Take time to click on the photos of the car in progress and just marvel at the craftsmanship going on here. It is pure art.
Enjoy!
Posted by Steelworks at 5:00 AM

Here's some information from the newspaper of 1955. It wasn't just Daywalt's ability to see the front wheels that caused the panels to be removed.

"The first time out for a practice run Daywalt had the bubble canopy over his head, but it was off Monday when the local driver reeled off a 131-plus practice try. It was explained that the friction on the plastic bubble was causing dust particles to smear and hamper his vision. Daywalt said he also experienced some trouble with the leather padding flapping around in the cockpit. As for the fenders, the biggest problem is how to check the wear and tear of the tires during the race. They say the rubber will be checked by touch rather than the naked eye and this is one big reason why Daywalt will probably spend a lot of time out on the track during the practice period."

"Reports from 'Gasoline Alley' are that the new Sumar car is a 'flop,' but Daywalt still thinks the car can go, if the mechanics can get the 'font-end condition' that has given him so much trouble on the turns straighten out. The car Daywalt is to pilot has attracted a great deal of attention with its fenders and bubble canopy. The latter part of the car, probably won't be around Saturday, but the fenders will be there. There was some doubt as to whether he'd be able to get the 'feel' of the car with the wheels covered, but if he qualifies come race time they'll open little windows to expose each tire."


"Daywalt was experiencing troubles with his new Sumar special over the weekend and did not attempt a qualification run. He told a Plain Dealer reporter he was having difficulties with the car in the 'turns.' It was pointed out by Daywalt that it was strictly a 'wind' condition and it was holding him back from getting ay speed out of the 'streamlined' auto. The Sumar car may take on a 'new look' by the time fans arrive back at the track for next Saturday's time trials, Daywalt, mechanics, and owner Chapman Root had a two-hour long conversation at the track Sunday with a technical from Allison Aircraft company and the latter advised some changes in the body design. Daywalt said he was 'encouraged' after talking to the aircraft specialist."

"Most observers and Daywalt himself were of the opinion that the body design of the Kurtis-Kraft car was a little too much 'streamlined.' There was plenty of power in the Meyer-Drake engine under the hood, but the wind conditions in the turns offered plenty of resistance to both the racer and the driver. An airplane designer from the Allison Aircraft company was present at the track last Sunday and Daywalt upon consulting the former was advised that some body and mechanical changes could be made to remedy the situation..... The Sumar Special looks like a fugitive from a jalopy race, but everyone agrees that looks aren't so important, but getting in the 'big' race is."

"It was the oddest looking car on the track, but the de-streamlined Sumar Special, with Wabash's Jimmy Daywalt at the wheel, pushed through a 139.416 Saturday mark to qualify for the 500-mile Memorial Day race. 'That was the hardest drive I've ever made in my life,' said the veteran of two other 500-mile races. 'If I had had to drive that hard last year, I would have made 43,' he said. A great favorite among racing fans, Daywalt wasn't happy with the Sumar's performance Saturday. 'It wasn't right today, and we know it,' he said. 'But we're in, and that's the main thing.'
"Due to aerodynamics problem, both the canopy and the fenders have been removed, leaving a car that looks as though it was started and the mechanics forgot to finish it. Regardless of how it looks, it was plenty of get up and go. Daywalt promises that by nest year it will once again be the most beautiful car on the track, and what's more, it will be the fastest. Removal of the fenders has exposed much bulky accessory gear along the sides of the car. where as this gear, such as the oil tank is covered in other cars, it is in the open on the Sumar, causing increased drag. Then too the Sumar weighs about 200 pounds more that the other cars. This drag problem almost knocked the Sumar out of this year's race. With the streamlining, air packed up inside the fenders and had no place to escape, adding several hundred pounds of drag. Along the aerodynamics line, the ultra streamlining of the body caused air rushing over the surface to act just like air over an airplane wing. The result was that at high speeds airflow tended to lift the rear of the racer right off the ground. this made it practically impossible to handle on the curves... This summer the Sumar will be put through a series of wind tunnel tests to determine the causes of the excessive lift and drag. Daywalt says all the bugs will be worked out then, and in 1956 the Sumar will be cream of the crop. 'It'll be the keenest job here,' he said."