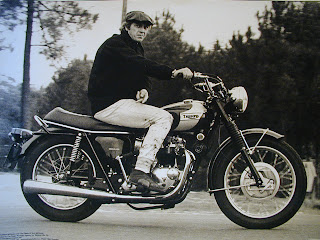 Sorry to say folks but this one is going to have to be short and to the point. I'm just getting in and it's after midnight. Shop time just slipped away tonight and then some. Good Bronco day overall though. Installed the shifter boot and surround, new shocks, plumbed the fuel system from the tank to the carb, and changed the fluid and filter on the trans. More proof that you have no idea how things will go with an old car, you would never believe what the biggest job of the day was from this list... any guesses? The shifter boot surround! Unbelievable. The transfer case almost touches the floor of the truck and 3 of the 4 bolts that hold down the surround were not only completely out of sight and impossible to get to with your hand, but were so close to the top of the case that you couldn't start a nut on them. The bolts had to be cut down to clear but still show thread when they came through the floor, and the nuts had to be held by small vise grips that I taped to a long wooden dowel that I fished up in there... all of which I could only see through a mirror stuck up in the trans tunnel that I could just barely get my shop light to shine into. When I had the nut in the visegrips resting up against the bottom of the bolt, I then went up into the truck and turned the bolt to try and get it started in the nut below. It took many many tries to make this happen. Yes I considered lowering the transfer case down a couple of times but talked myself out of it repeatedly.
I don't know if you can visualize this. If you can't then consider yourself lucky.
Lastly, I need to make some corrections regarding the story about the Johnnie Parsons little roadster. My friend Roy Caruthers was nice enough to point out some things that I got wrong and we'll start with the misspelling of Mr. Parsons name which is spelled Johnnie, not Johnny. The young woman who owns the car now, Joanie,  is not Parsons' granddaughter but her daughter. The job of restoring the car was originally offered to Caruthers but he passed on it as he felt the job was more for Jerry Weeks than for him. Finally, the man responsible for making the connection that the photo in the Rodder's Journal was the Parsons car is Roy Caruthers' step Dad, John Capels.
My apologies for the misinformation.
Have a great weekend folks. I'm back out on the road again as of midnight Friday night. The last run of the year! Saturday night Merrilville, Indiana... Sunday Rochester,Minnesota... then a big fat drive to Vegas where we'll play Thursday and Friday nights at the House of Blues in Mandalay Bay. I'm hoping that while in Vegas I can make it by the Shelby facility and report back. Speaking of, from Vegas we go to Wendover, Utah!, and you all know what that means... Bonneville!!! I'll be making my trip to the salt at some point while I'm there just to see it. I can never ever be that close by and not walk on the salt. A religious experience every time.
From there I'll be flying to LA to visit my friend Tom Sparks for about 4 days. I can assure you I'll have plenty to report on about that! Tom always has cool stuff going on... and it's LA after all.
So, there you go. Should be some good stuff around the corner. Keep checking in and always remember to 'Stay tuned'.
PS   I realize today's photo has no connection to the post, I just like it.
Posted by Steelworks at 5:00 AM

Hope you get a chance to step out on the salt. My brother-in-law put together a book based on my blog about my trip out there last year. I was looking at photos and thinking, "I gotta go again...set a record...200 miles per hour...the salt..."