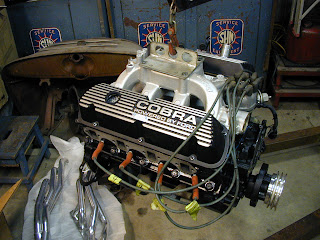 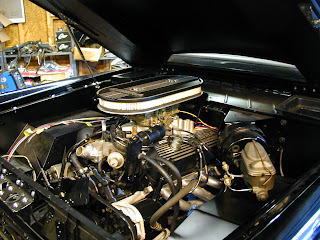 As promised, we're back today to talk about the important stuff... the drivetrain. Ultimately, this is what will give the truck its personality, especially from the perspective of the driver. It dictates what sound you'll be hearing and what vehicle type you'll be dealing with. A simple bit of direction was thrown my way when the subject of the engine came up, I was told,"I want it to be scary fast!" Now that's something that I would say, surely, but I had to double check that that is really what he wanted and he stood by it. So I guess you could say we were off to the races.
When the truck was delivered to me it had a 351 Windsor that was reported to be in fine shape with low miles and was built by a reputable speed shop in Huntington Beach that built trucks for The Baja. Those are mighty good credentials so I went into the engine feeling positive. As it stood, it was dressed with quality speed equipment that was right for the time when it was built ( about 10-15 years ago ). An older Edelbrock aluminum intake sat on cast iron Dart heads which were fed by a very sick old Carter AFB. It had an old set of small tube headers and some other go fast goodies here and there. I was able to get it to run enough to assess the condition of the heads and whether or not it pushed good oil pressure. All of that checked out very good and, although it was tough to tell with the sick carb, as you had to drive it with 2 feet, it sounded like it had a mild cam and actually had some good grunt when the carb would momentarily cooperate.
The week points to me were the older technology speed equipment like the intake, carb, cam, and headers, and the fact that I just didn't know for sure what was inside this thing and the true condition of it... not without tearing it down. Also, it felt like the stock torque converter was still in it and that wouldn't do for what I had planned. So out it came.
To say the least, it never goes like this, but... everything was checking out. First of all, when I pulled the valve covers the heads looked like an engine with 300 miles on it. Just immaculate. It couldn't have had more than a few thousand miles on it. The Dart heads had roller rockers with screw in studs. I pulled the intake and, again, immaculate. So, because we were in serious down and dirty 20 shows a month tour mode, I decided to farm out the go through of the engine. The building of an engine is hands down my favorite part of any build but to save time and keep things moving it only made sense to hand this off.
Far and away my favorite machine shop in the Nashville area is Shaklett automotive. Run by a father and son team, they have a small, clean, and organized operation. Both father and son are racers and communicate in a very neutral, direct, and honest way. If there is something that turns me off in a shop, it's when the conversation turns to tall tales or competitive brag-offs. You know what I mean I'm sure. Real racers deal with numbers and real results, some guys who don't can end up telling me a story about their Road Runner they had back in the day that used to be able to lift the front wheels over a pop bottle or that they once wound it up to 160 mph and it still had pedal left. These are the same guys that don't believe in Plasti-gauge.
None of this was a problem at Shaklett's and, in addition, they got everything done ahead of schedule! They tore down the engine the rest of the way and checked all the tolerances. Everything checked out good. The cross hatching in the cylinder walls was nearly fresh looking so this was not a candidate for a rebuild. The engine went back together with a new Comp dual pattern hydraulic cam, gross lift .519 and .523 intake and exhaust, a new Edelbrock air-gap dual plane intake, and a new Holley 750 4160 carb. To help it breath a bit better we replaced the old small tube rusty headers with new ceramic coated Hooker Comps.
We tuned it and broke it back in on the dyno at Shaklett's. With some carb and ignition tweaking running a pretty conservative set-up it pulled 384 hp. Not bad for a mild pump gas set-up. This will be transfered back through a C4 transmission with a 3,500 TCI stall converter and spinning 4.56 gears. Remember, it will have a tallish tire on it but even so, I believe it's going to be a pretty good thrill ride with the Bronco's short wheel base and relatively low weight. Will it be scary fast?, we'll have to wait and see.
Posted by Steelworks at 5:00 AM