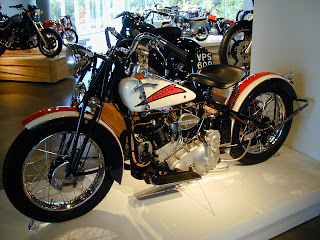 There are few things that make me happier than when my two worlds of music and motorsport collide. It happens often and is of great interest to me just how and why this is. It seems that they are connected on some level by the people who have a passion for one or the other, and in some organic way, time has just brought them into the same cultural sphere. All I know is that I could never begin to count the number of times a car guy friend of mine has revealed himself to be a serious music efficienato or vice versa. Again, can't really explain it but there you go.
I was reminded of this today when talking to a musician friend of mine who doubles as a motorcycle historian. We were waxing on about all things cool in the vintage motorcycle world and we came to the subject of the legendary Crocker bikes that were made in the 1930s. Said by many to be the Duesenberg of motorcycles, they hold a strong position in the elite group of pre war, hand-made bikes. You could almost go as far as saying they were the American Brough Superior. My friend happened to mention that he had heard rumor of Paul Bigsby being involved in the design of the Crockers, and this got my interest immediately.
You see, Paul Bigsby is an important guy in my life as he designed one of the guitars that I make my living with. A 1959 model. Not only that, but Bigsby is responsible for designing what is possibly the finest tremolo tailpiece for electric guitar... at least I happen to think so.  I investigated this Bigsby/Crocker rumor and sure enough it is true. Paul Bigsby was a designer who worked for Al Crocker and did design many of the components on the Crocker bikes that were produced right before the war. If you are ever in a music store and see an electric guitar on the wall with an aluminum contraption bolted to the bottom of the body and it says Bigsby on it, take time and study it. You'll be shocked by how much it looks like a 50 year old motorcycle component.
So once again, there it is. Music and motorsport coming together.
As for the Crocker motorcycles, they are true marvels. Beginning as a designer and machinist for the Indian motorcycle company in the 1920s, Al Crocker would eventually design the first OHV conversion for an Indian motorcycle in the late 1920s. Soon his growing reputation would lead him into the business of designing and building his own motorcycles named, appropriately,  Crocker.
Working out of a small shop in Los Angeles, Crocker set out to make his "super bike." All Crocker bikes were made to order and combined unparalleled quality with unheard of performance for the time. Crocker bikes were advertised to be able to cruise comfortably at speeds of 90-100 mph. An absolutely astonishing claim for the 1930s. With engine capacities in the 91 ci range ( approximately 1,500 cc ), it wasn't until 1998, and the introduction of the Yamaha XV1600, that Crocker lost its title as largest capacity production motorcycle ever produced.
As was the case with all machines built to this standard during the depression era, Crocker could not maintain production and closed its doors just in time for the war in 1942. Al Crocker soon found himself making airplane components for Douglas Aircraft and changing his company name to Crocker Manufacturing. Recognized again for his attention to high quality and detail in design, Crocker was eventually bought by a little company named Borg Warner.
What has become of the great Crocker motorcycles of the past you may ask?, well, some speculation surrounds these numbers but most agree that somewhere between 60-70 bikes exist today of the nearly 200 that were produced. Quite recently the Crocker name has been resurrected and new bikes will soon be available made to the exact period specifications of the original 1930s machines.
But can you ever replace the romanticism of the real deal? Apparently not, as original Crocker bikes regularly trade in the $200,000 to $250,000 range.
Posted by Steelworks at 5:00 AM

Thanks for posting a little about some two-wheeled machinery. I've heard the Crocker name mentioned many times, but didn't know of the history. Now I want to go buy a vintage Tele with a Bigsby on it.

Got anything on the Rudge motorcycle? I have some pictures of a gorgeous black one that ran at the Newport Hill Climb this past October.