It was a very good year... and then some 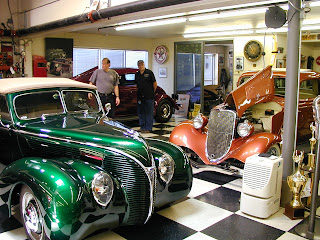 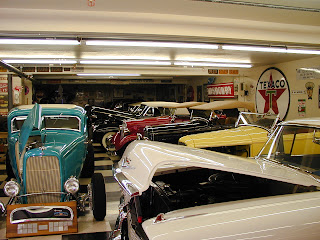 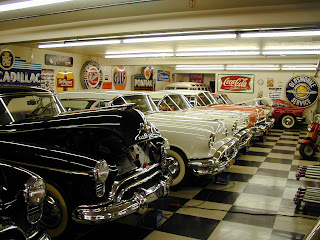 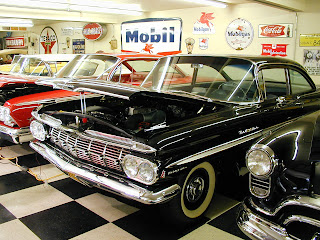 A funny thing happened while I was going over the Brizio photos for yesterday's blog, I realized that all in the same day I visited both the Brizio shop and a private collection that is housed nearby. Don't ask me how I could have spaced this one, my defense is the old "different town everyday" I suppose. Don't mistake me here, I certainly remember seeing all of this, I just honestly forgot that it was the same day... and what a day it was.
I hope it's OK that I keep the owner of this amazing collection anonymous. Obviously they wouldn't want their name spread around a lowly blog, so I'll just say that the person who has amassed this incredible collection of cars, parts, and automobilia, is not only armed with impeccable taste but is also a seriously good guy for letting me cruise around his toy box and take in the scenery.
Many things in this collection really knocked me out, and I'll just take a minute to point out some things that were real highlights for me; For starters, the collection of early V8 Fords was incredible to see under one roof. The collector is obviously a hot rod and performance oriented enthusiast, so it made me very happy to see that he also has a sincere appreciation for unmolested stockers. Every day there are less and less of these cars and the more people who stand up and take notice of solid original iron the better. As the saying goes, "they're only original once", and I defy any hot rodder worth his salt to ride in a well kept original '32 Ford and not be amazed by the high quality product Henry Ford made available to his buying public. There is a reason these cars are legendary and it should be noted that they made their reputation long before they were made into hot rods.
Another aspect of the collection that I really enjoyed was the range of early American high performance, pre-muscle car era, muscle cars. I've always had a soft spot for the mid/late '50's- early '60s high performance production cars. I love the look of these cars as they read like something a skinny tie'd Darren Stephens would pull into the driveway after a long day at the office, but house something under the hood that is anything but conservative. Early Olds Rocket V8s, Red Ram Hemis, 2X4 nailhead Buicks, Paxton supercharged Y-block Fords, tri power W-blocks, letter series Mopars, J-2 tri-power Olds' ( we had one in our family- a '57 2-door hardtop, J-2, silver and slate grey two tone with a red interior... what a car! ), the 2X4 and f.i. '50s Chevys of course, and then the great early '60s super stocks that came after and never seemed to quite shed their plaid insert interiors even though they would ultimately house 400 plus h.p. solid lifter V8s under their hoods. I have a feeling sometimes that the mutton-chopped, bell-bottomed muscle car owners of the late '60s never put it together that their fathers knew all about this production horsepower stuff long before hood scoops and side stripes.
A few other things that I think you'll enjoy seeing are the various period crate engines hanging around. If memory serves, I believe every manufacturer was represented somewhere in the collection by their top of the line performance engine of the day. Fully restored or never run CE engines in the form of 409s, Hemis, Rockets, Nailheads, F.I. 283s and 327s, I even saw an L-89 (aluminum head) big block Chevy on an old GM crate. But what has to be the greatest single piece of automobilia that I have ever seen or even heard about is the original, never out of the crate, 1920s Ford dealership sign. How it could be possible that this thing made it so long in nothing short of new condition is astonishing. As I stood looking at it I still couldn't believe my eyes.
For the strict hot rodder, the black '32 roadster is Ed "Axle" Stewart's original hot rod... complete with period dry lakes timing tag. Other HR notables are the supercharged flathead and Buick 2x4 nailhead coupes... and for the record, the black '29 model A roadster pickup with the Cad is an original unrestored late '50s Hot Rod magazine cover car.
So sit back and enjoy cruising through the photos...   and have a safe and happy new years eve!
Posted by Steelworks at 5:00 AM