The good, the bad, and the ugly of touring 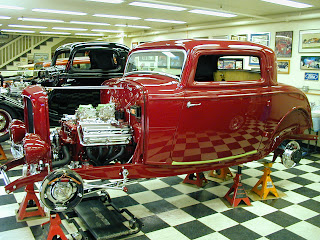 "Dues, dues, dues, you've got to pay your dues",  said the great Lenny Bruce when asked about what it takes to make a living as a performer. Nothing could be truer of course. The thing is, unless you're at the very top, it seems that the paying of the dues is a constantly recurring component of this life and, to me, it's a good thing. I can't complain about paying dues. The dues keep the balance, they keep your head in check, and they remind you of how good it is when it's good. In my opinion, the musician serves the music, not the other way around, and if you get into this line of work looking for "it" to take the trouble or the concept of work away completely, or worse, give you some kind of power, then you've really missed it. Now how's that for some soap-boxxy hubub? Because I started this little diatribe with a Lenny Bruce quote, I'll finish with my favorite touring story which involves the Benny Goodman orchestra. The story goes that the famous big band was on tour up in Minnesota in the dead of winter and were flying into one of the twin cities for a performance. Because of some nasty weather that had blown into the area that evening, the bus to take them from the airstrip to the gig didn't show and they were forced to walk, in their suits, instruments in hand, to the nearest traveled roadway to flag down some lifts to get them to their gig. While walking across a field in search of some kind of civilization, the musicians came upon a small farm house just as the dinner hour was coming on. Several in the group stopped, peered through a window, and witnessed the following; a perfect little home, fire crackling away in the hearth, a dinner table mounded with food, around which sat a young farmer, three beautiful children and his beautiful young wife, all beaming with smiles of comfort and contentment. The musicians stood outside the window, cold, hungry, their pants and shoes soaked from mud and slushy snow, taking in this Norman Rockwellian-like scene. After a while, one of them turned away from the window, looked at Goodman and said,"Man, I don't know how people live like that."
And that's the way you have to feel, or you're in the wrong line of work.
I was once again reminded of all of this while traveling over the past two days. What should have been a relatively easy day and a half drive, turned into a 48 hour trapped in a metal tube 2000 mile marathon.
Basically we were supposed to leave out of southeastern Minnesota on Sunday night after a show for a straight through drive to Las Vegas. The first bump in the road came from some very sketchy weather reports coming in regarding the upper midwest. This made us change our travel route to, instead of heading straight west and then south to Vegas, immediately head south out of Minnesota, down to Oklahoma City, and pick up I-40 to take west to New Mexico where we would then turn right and head north up to Vegas. I can promise you that it sounds  shorter in print than it actually is.
Everything was going to plan until we got to somewhere in Missouri. In the early a.m. of Tuesday morning we drove straight into a surprise ice storm. It seams that they were getting some serious rainfall during the night when suddenly the temperature dropped to way below freezing almost in an instant. As you can imagine, this caused some chaos. I've yet to see anything like this. Eighteen wheelers were off the road everywhere. If you looked out the front of our bus they were in the median or off the shoulder as far as you could see. Everything stopped dead for several hours while all traffic sat parked bumper to bumper on the interstate literally waiting for a slight rise in temp that was forecasted, hoping that it would be enough to melt the sheet of ice that was the roadway. Amazingly, it worked and at about mid day we all started moving again. Now understand that I'm not really trying to make what would admittedly be a pretty grandiose comparison between our situation and the famous Goodman big band story. I believe in a certain amount of relativity with all things... but us sitting on our bus, trapped, with no option but to sit it out ( with good heat, some food, pretty comfy bunks to nap in, and satellite tv ) is not quite the roughing it that the old Goodman boys experienced. To be honest, the most frustrating part for me was that, thanks to the extreme cold we had in Minnesota, the internet was out on the bus for the entire trip and I couldn't get my blog out. So, there it is for anyone who was wondering what happened to my yet unblemished record of keeping up with the copy. Mother nature is king.. or would that be Queen?
Either way, it's good to be off the bus, in a warmer climate, and back in the saddle. Tomorrow, me and a few like-minded folks from our crew are going to head over to Carroll Shelby's Las Vegas facility and see what's cooking. This would of course be firmly placed in the 'good' column of touring. Should be an interesting experience and one that I will be sharing with you in the following post. So, until then, stay 'tuned' and stay off the ice.
PS...     The photo attached to today's post was taken of a car under construction at Roy Brizio's hot rod shop in south San Francisco this past summer. Lets see if anyone can name the make and model of the car including the engine? This should be an easy one.
Posted by Steelworks at 5:00 AM

Obviously, that's one of Henry's, or maybe a thoughtful 'glass refab of same. Duece with a Hemi in the engine bay. The valve covers remind me of the older models, like a 392. Looks like Carter carbs on top? And why, oh why, has someone decided that DRUM BRAKES are enough to whoa that thing?!?!