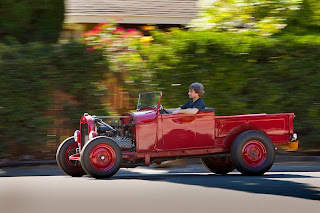 Well, what can I say but… welcome back! It has certainly been a while. I suppose if a seriously bitchin’ issue of Hot Rod Deluxe won’t bring me back into the fold, than nothing will.

Wow, that’s about all I can say about this latest ( November 2011 ) issue of that fine publication. Wow! I am just knocked out. What a great job these guys did. My sincere thanks go out to both Jay Storer and my pal Dave Wallace Jr for putting in the time, the attention to detail, and the passion that we all felt my late friend Tom Sparks’ story deserved. It isn’t very often that something so dear to you can be handed over to other folks and what comes out in the end is beyond your expectations. But this is one of those rare occasions. Again, well done you guys! I could never thank you enough.

As the text states many times throughout this issue, Tom’s story could easily fill a dozen issues of any magazine and we would still just be scratching the surface. His life and accomplishments are simply hard to comprehend for us mere mortals, but Dave and Jay did an excellent job in giving us all a nice detailed overview of what Tommy did. I think anyone who reads this issue will walk away with as good an idea as one can have of just how serious a guy Tom was, and this is far and away the most pleasing part of this for me. Tom was such an understated and humble person that you’d oftentimes have to pry out of him even the most matter of fact of his life’s achievements. Because of this, Tom flew pretty far under the radar and I always wanted to try and find a way of helping him get his due. I wanted this because he’d earned it, he was my friend, and I knew that his story would inspire the younger generation of car guys following him just as it had done for me. Thanks to Dave Wallace and Jay Storer, I think we’ve been able to do just that.

I have to say that some of the issue is pretty damn “blush-worthy” for me, but I’m gonna try and power through it! I honestly do feel a little embarrassed by how much attention I got ( especially in the crazy two-page centerfold… I’ll find a way to get you back Wallace! ) , as I already feel a little squeamish about my unbelievably good fortune in having been chosen by Tom to be the caretaker of his old roadster pickup. That’s so much more than enough that anything beyond that feels somehow greedy and beyond flattery. The only thing I can say is that it is truly one of the highlights of my life and I will do everything possible to do right by the roadster and by Tommy in making sure that it is properly treated and preserved for the next caretaker.

Speaking of inspiration, some readers may have noticed a little something in the “Roddin’ at Random” section of this issue that references my current project. As I stated earlier, being around Tom these past several years, as well as many of his fellow hot rod pioneers, has not just been inspiring… but flat-out life changing. To steal a label from Tom Brokaw, these guys really are our “greatest generation” and I don’t think it can be overstated just how awesome their impact on our country and culture has been. I think we feel it everyday without even knowing it and, much like Tom’s life, I think this ( and these characters ) shouldn’t go unnoticed.

In Monday's blog I will spell out what I’m working on and how excited/anxious I am to be so near the launch of it. It’s been a long time coming but I think it’s gonna be a lot of fun and, I hope, pretty entertaining for anyone interested in traditional hot rodding, vintage drag racing, American roots music, and all the other fun stuff that folks like us dig.

So welcome back… Stay ‘tuned’… and see you on Monday!

Posted by Steelworks at 9:03 PM

The articles were great! I am making a "Manning special" like the Bellesiles/Sparks and Bonney Special that was road raced in the early 50s. I have a set of the original blueprints and I know of people that own the original fiberglass molds. I am interested if you know how I can get copies of any of the photos that Tom had of that car. Bellesiles lost all the photos he had of that car. I have a blog that will follow my progress if you care.
http://manningspecialreplica.blogspot.com/

Great article on Tom. I had a similar good fortune of meeting Tom and Laura while vacationing in California. I even got to see him working on your flathead out back. It was probably the last one he built. On our last visit there, we spend the evening at Bob's Big Boy. That was the last time I saw
Tom. My wife videotaped several of our visits. He was quite an individual.
B.Howard
Cullman, Al.

Joel, I am so sorry that I've just now checked my blog. I haven't been doing much with it these days so your message sat here collecting dust. I am extremely interested in your project and will be more than happy to help in any way that I can. I have many pictures of the car and will share them with you. Please contact me so that we can start a dialogue.

I look forward to hearing from you.